The Cle Elum Supplementation and Research Facility in Washington is a one-of-a-kind research program and the premier supplementation research hatchery in the world.

The Cle Elum facility integrates its operations with the natural production of wild populations of fish. Begun in 1997 and sponsored by the Yakama Tribe, their goal is to boost the production of wild fish through supplementation techniques and to evaluate the program's long-term success. 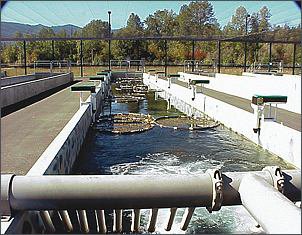 The facility randomly collects adults from spawning wild spring chinook as they return to the Yakima River. The eggs are divided into two groups. One group is reared under standard best hatchery rearing practices, and the other group experiences what is called Semi Natural Treatment (SNT) – surroundings that mimic the natural environment such as camouflage paint on walls, overhead and instream cover, and underwater feeders.

The study will help to determine if rearing under more natural conditions increases the survival of young fish once they are released into the wild. The hatchery adults are expected to spawn in the wild to increase the natural production of spring chinook.

2001 was the first year that the hatchery fish returned, and the results were encouraging: the supplementation facility saw about seven times as many adult fish come back per hatchery spawner compared to the wild spawners. Research is now focusing on the spawning channel to determine the reproductive potential of the returning supplementation fish – a very important issue in order to evaluate the long-term success of the project. The ultimate goal is not only to see a large return of adults, but the successful reproduction of those fish into the next generation.