The Pacific Northwest improved its electric energy efficiency in 2013 by 268 average megawatts, an amount equal to the annual electricity demand of about 180,500 Northwest homes. 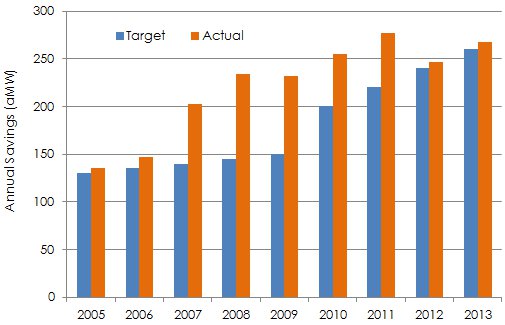 Energy efficiency is now the second-largest resource in the Pacific Northwest, behind only hydropower. Total regional investment in energy efficiency in 2013 was $375 million (2006 dollars). The investment was a bargain compared to the cost of building new power plants. The average cost of efficiency improvements was about $17 per megawatt-hour, about five times less than the cost of power from a new gas-fired plant.

“The 2013 savings add to a tremendous legacy of achievement for the region over last 34 years,” Council Chair Bill Bradbury said. “It's phenomenal to achieve so much in terms of reducing demand for power at such a low cost to our region’s ratepayers.”

The Northwest Power and Conservation Council compiled the savings estimates from data gathered by the Council’s Regional Technical Forum from 80 electric utilities, the Northwest Energy Efficiency Alliance, the Energy Trust of Oregon, Pacific Northwest Generating Cooperative, and others.

The 2013 achievements exceeded the target in the Council’s Sixth Northwest Power Plan by eight average megawatts. Annual targets have been exceeded every year since 2005.

In 2013, efficiency improvements in commercial buildings continued to grow, as they have in recent years, residential efficiency investments remained stable, and investments in agricultural energy efficiency grew slightly.