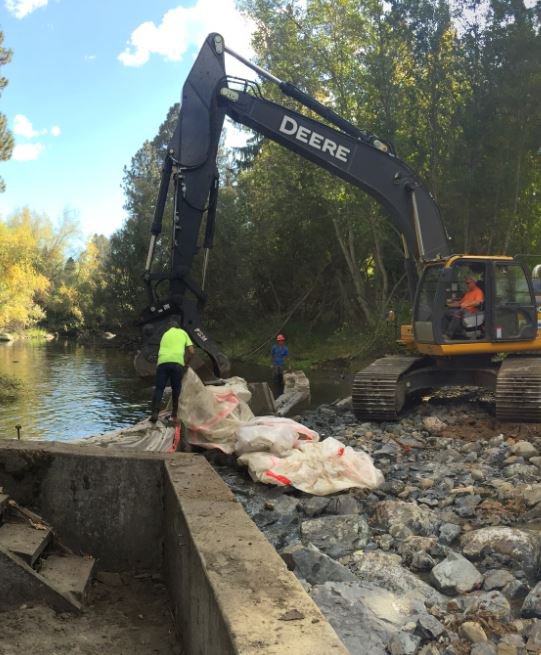 Access to 20 miles of fish spawning and rearing habitat in the Lostine River in Northeastern Oregon has been restored by replacing a 50-year-old passage structure with a modern design that mimics natural river conditions. Partners in the collaborative effort included state and federal fish and wildlife agencies, the Nez Perce Tribe, the Sheep Ridge Ditch irrigation company, the Grande Ronde Model Watershed, and adjacent landowners.

The aging water diversion structure presented a migration barrier to ESA-listed spring Chinook salmon and bull trout, and other migratory species in the river including summer steelhead and rainbow trout. This was particularly acute during the late summer and to the end of September when river levels naturally drop but the irrigation season continues. Before, the old diversion was a barrier to fish migration, especially when the river was low.

Irrigation is crucial to agriculture in the Lostine basin, and for decades much of the water was provided by push-up dams – berms of river rock and sediment pushed into place to divert water into open ditches. These dams would wash out and have to be rebuilt annually, and if they spanned the river they blocked fish passage. Some were replaced with permanent structures, like the 1960s-era Sheep Ridge diversion two miles south of the town of Lostine. Over time, the concrete structure became a barrier to fish passage and ultimately did not meet modern design criteria for fish-passage.

Working together, the partners built a new structure based on the design of a similar diversion built by the City of Lostine in 2012. The existing fish ladder and diversion wall was overtopped with an engineered roughened channel that allows year-round fish passage and natural sediment transport. The design restores natural sediment transport, meets state and federal passage criteria, and also appears to have better longevity than past diversions. That is because boulders placed in the river will help deposit sediment and scour the river bed as flow conditions change, creating more natural conditions for fish while also providing irrigation water.