The Seventh Northwest Power Plan calls for the Council staff to develop a white paper on the value energy storage to the future power system (Action Item ANLYS-16). This paper responds to that direction.

Energy storage seems to have found some initial legs for development in the United States. Regulatory policy, state level mandates, grid modernization programs, and declining technology costs together have created market conditions in which hundreds of storage projects were deployed throughout the country between 2012 and 2016. These projects combined to add nearly 1 gigawatt of new capacity to an existing energy storage fleet that has been composed primarily of pumped hydropower and totaled 23.5 gigawatts across all technologies. Three large-scale projects, each more than 100 megawatts of capacity in size, contributed the majority of this new storage, and the remainder was primarily in small-scale battery projects of hundreds of kilowatts or less.

The initial outlook for 2017 indicated that the key drivers that set up growth over the last several years in particular would continue to encourage new development, primarily in batteries with increasingly longer discharge durations owing to falling technology costs.

The East Coast and California have been far and away the most active regions for energy storage development. On the East Coast, new regulatory changes, such as Order 755 of the Federal Energy Regulatory Commission in 2011) have contributed to a robust ancillary services market to encourage the development of storage for economic fast-frequency response. This market dominated new storage development from 2011-2015 but has since shrunk due to regulatory changes and declining values for regulation because of low natural gas prices.

In California, aggressive policy (see, for example, AB 2514 in 2010) has mandated the development of 1,325 megawatts of new energy storage by 2020. Investor-owned utilities in California have begun executing on this in earnest, and California is now the most active region for development with more than half of the nation’s projects in 2016 (by number of projects and by capacity). This activity has since been bolstered by a mandate to procure an additional 500 megawatts of customer-sited storage to be split evenly between the state’s three investor-owned utilities (AB 2868, 2016).

In addition, California re-opened its self-generation incentive program in 2017 with a budget of $450 million. About 80 percent, or $390 million, is designated for projects of more than 10 kilowatts, which are considered large-scale, and the remainder is designated for residential projects of less than 10 kilowatts. The program provides funding on the basis of dollars per watt-hour, and awards are granted through a lottery over several separate allocation periods.

In either case, whether by law or by incentives for self-generation, or by some other means, the projects being developed in California are still typically not economic without subsidy or the ability to include the mandated procurement in a rate base. California still is very much in a learning phase while also being acknowledged as the national leader in energy-storage development.

Policy-makers, regulators, utilities, and regional planners in the Northwest also have begun to explore the potential for energy storage to be a cost-effective resource for the region. The state of Washington has provided funding for several storage projects through grid modernization programs, and the state’s Utilities and Transportation Commission staff released a white paper on incorporating storage in utility integrated resource plans. The paper indicated that the Commission may be considering significantly strengthening the extent to which storage must be evaluated on a comparative basis in the potential procurement of bulk generating resources and even upgrades to transmission and distribution systems. The Commission now is considering storage and integrated resource planning in a consolidated docket.

In December 2016, the Oregon Public Utilities Commission issued a final order (staff recommendations accepted in March 2017) that required the state’s two investor-owned utilities to each submit proposals for qualifying energy storage systems with the capacity to store at least 5 megawatt-hours of energy no later than January 1, 2018. Initial candidate project proposals were due July 15, 2017 for interim review and comment. House Bill 2193, the law that led to the order and which the Oregon Legislative Assembly passed in 2015, directs the Commission to consider whether each energy storage proposal 1) meets the established guidelines in law; 2) strikes a "reasonable balance" for ratepayers and utility operations; and 3) is in the public interest. Contracting for those projects must be in place by January 1, 2020.

The Montana Public Service Commission directed NorthWestern Energy to specifically evaluate pumped storage in its next integrated resource plan, expected in 2018 (for background see comments on Docket N2015.11.91). Meanwhile, a storage task force was created in Idaho, but no project development or policy is expected.

Planning is a primary thread underlying much of the activity in the Northwest. Current planning processes typically evaluate the cost effectiveness of candidate resources primarily on the basis of contributions to capacity or capacity and energy, often using models without sub-hourly resolution. This is important for storage because it is currently unlikely for any storage technology to pencil out as economic on the basis of capacity contributions for resource adequacy alone. However, a single storage project may be able to deliver several additional values beyond capacity that could combine to make storage an economic least-cost resource. It is not currently common in the region for those values to be considered as fully as may be possible.

In developing this white paper, Council staff worked with the Council’s Generating Resources Advisory Committee and other subject matter experts to describe promising candidate storage technologies, the values they may provide to the system, the breadth and depth of the market to date, and the extent to which policy and planning opportunities could help to better evaluate the suite of benefits storage may provide the power system. Staff is grateful for the advice and feedback of these experts. 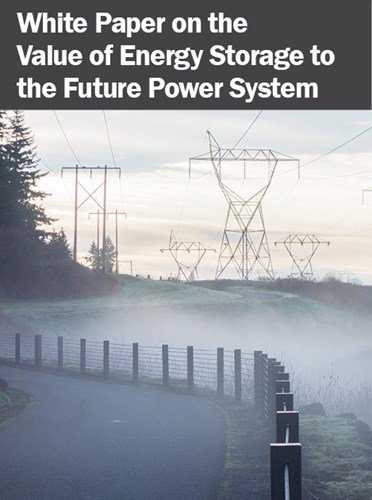