Its Role in Creating a New Era of Clean Energy

Hydropower is the foundation of the Pacific Northwest’s power system, providing about 50 percent of the region’s annual energy generation (the amount of electricity produced over a year) and 54 percent of its flexible capacity (the maximum rate of generation; important in meeting periods of peak loads).

It is a low-cost, clean energy resource, and the hydropower system can be operated to adjust its generation up or down quickly to meet fluctuations in demand. In fact, it is this unique characteristic–the ability to shape generation to fit the needs of an increasingly dynamic power system–that has been a key tool in helping to add other renewable energy resources like wind and solar to the power grid.

The hydropower system can be operated to adjust its generation up or down quickly to meet fluctuations in demand...a key tool in helping to add other renewable energy resources like wind and solar to the power grid.

While hydropower can provide the full range of flexibility services to operate the electric grid, most of these services are not marketed to grid operators. Because robust markets for these services have not been developed, operators must rely on their own resources, like natural gas or coal, and they sometimes build new plants, instead of using the hydrosystem’s flexibility. Consequently, consumers end up paying more for their electricity.

With today’s emphasis on producing carbon-free electricity in the West’s power grid, and with many retiring coal plants, these services will be even more valuable in the future. Finding a better way to offer and pay for these services will help to ensure the competitiveness of the hydrosystem.

The Bonneville Dam, 40 miles east of Portland, Oregon, was built between 1934 and 1938 – the first federal hydropower plant on the mainstem of the Columbia River. After the era of large-scale dam building throughout the region ended in the early 1970s, hydropower continues to be the Northwest’s predominant resource, followed by energy efficiency, coal, natural gas, and renewables. 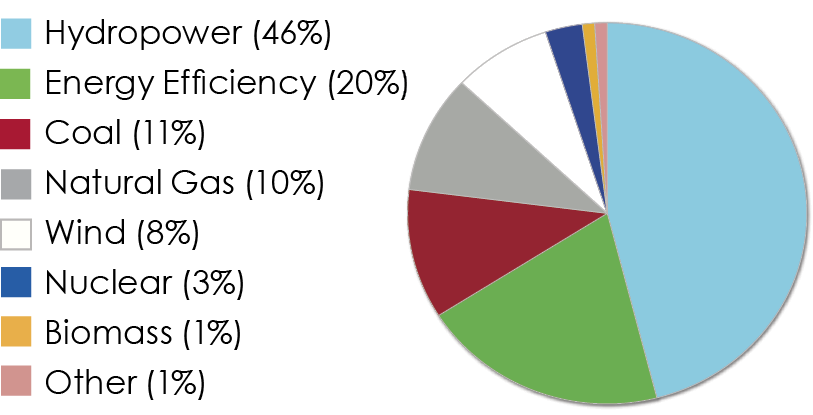 While the energy from hydropower is variable across months or years, wind and solar generation can have dramatic swings within minutes or hours, and a project may not be able to provide power when the system needs it. Conversely, there are times – especially during the spring runoff when both renewable and hydropower production are high – when supply exceeds demand.

Historically, the Northwest has exported its surplus power to California during certain times of the year, with the revenues benefiting Northwest customers. But, as the power system has evolved to include more competitive resources, energy prices are consistently trending downward and price volatility on short timescales is increasing.

Most of the recent resource additions in the region have been wind and solar projects, with the hydrosystem complementing their generation by using its flexible capacity to help balance their ups and downs.

As low-cost natural gas plants and increasing amounts of renewable generation have come online, north-to-south export sales have fallen off substantially during the mid-day when solar is peaking. When this happens, prices fall on the spot market as gas-fired plants on the margin reduce their prices in order to continue operating. Low cost Northwest hydropower resources reduce their export sales, choosing instead to serve load more locally.

This glut of supply lowers electricity prices, reducing revenues and making it difficult for project owners to recover the cost of selling energy and still provide the reliability services needed to keep the power grid in balance. Traditionally, energy and capacity have been the most important services for grid reliability, but there are a host of other additional services that are critical and have often been provided without compensation. The growing amount of wind and solar generation on the grid only intensifies the need for these services. Debate is ongoing about how a market could be structured to provide reliability products efficiently and economically.

The hydropower system has provided myriad benefits to the Northwest over the years. In the early days, it was viewed as an economic miracle that would bring new industries and jobs to the region; irrigate the desert and make it bloom with high value crops; and electrify rural communities. 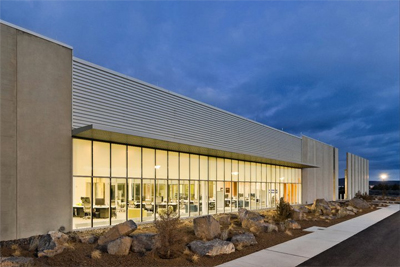 Today, it is still viewed as one of the region’s important economic engines, but instead of attracting aluminum smelters and other heavy industries with the promise of inexpensive power, it is attracting high-tech industries like computer chip manufacturers and data centers.

Storing, moving, processing, and analyzing data requires a lot of energy. By 2021, streaming video alone is expected to make up 82 percent of internet traffic, according to IT company Cisco. And artificial intelligence technologies will only accelerate this transformation.

As it did for the industrial economy at the dawn of the twentieth century, the hydrosystem is providing a low-cost, stable power supply for the burgeoning digital economy.

The ability to generate electricity without producing carbon is also becoming more valuable in a world where climate change is seen as an urgent global and regional issue. While robust carbon markets are currently struggling to be established, many believe that it is only a matter of time before carbon-free power will demand a premium in our power markets. Given the proper policy signals, this should increase the economic value of hydropower over time.

For these reasons, industry leaders and policy makers are realizing that Northwest hydropower’s capacity resources are economically undervalued. In the West, capacity is generally sold in bilateral markets (single buyer and a single seller) rather than in organized markets as in other parts of the country.

If more utilities join to form a West Coast electricity market, utilities with a surplus of electricity will have new opportunities to sell power, including during peak load hours.

Capacity is not a single product, but many different products that help achieve reliability. In some cases, markets are evolving that are beginning to provide value for capacity. But for the most part, capacity products tend to be undervalued when there is an energy surplus, as the West is experiencing.

Not only will a more robust market benefit sellers, it will also save money for buyers because they will not have to build new generating resources to meet their peak loads. Placing a higher value on capacity will also encourage the development of batteries and pumped storage to support future flexible capacity needs. This is especially important as we continue to see the rapid acceleration of variable energy resources across the West, particularly solar.

Lower energy prices are making it difficult for hydropower operators to recover their costs by selling energy alone, yet only the hydrosystem provides the full host of electricity products that ensure grid reliability. Clearly, the market must evolve to reflect the changing needs of the power system. A transparent market that accurately values all the grid services essential for grid reliability, acting on short timescales, would achieve a more efficient, and ultimately sustainable, use of resources. Planning guidance to assign value to flexibility, could also be useful.

The Department of Energy’s Hydropower Vision report states that: 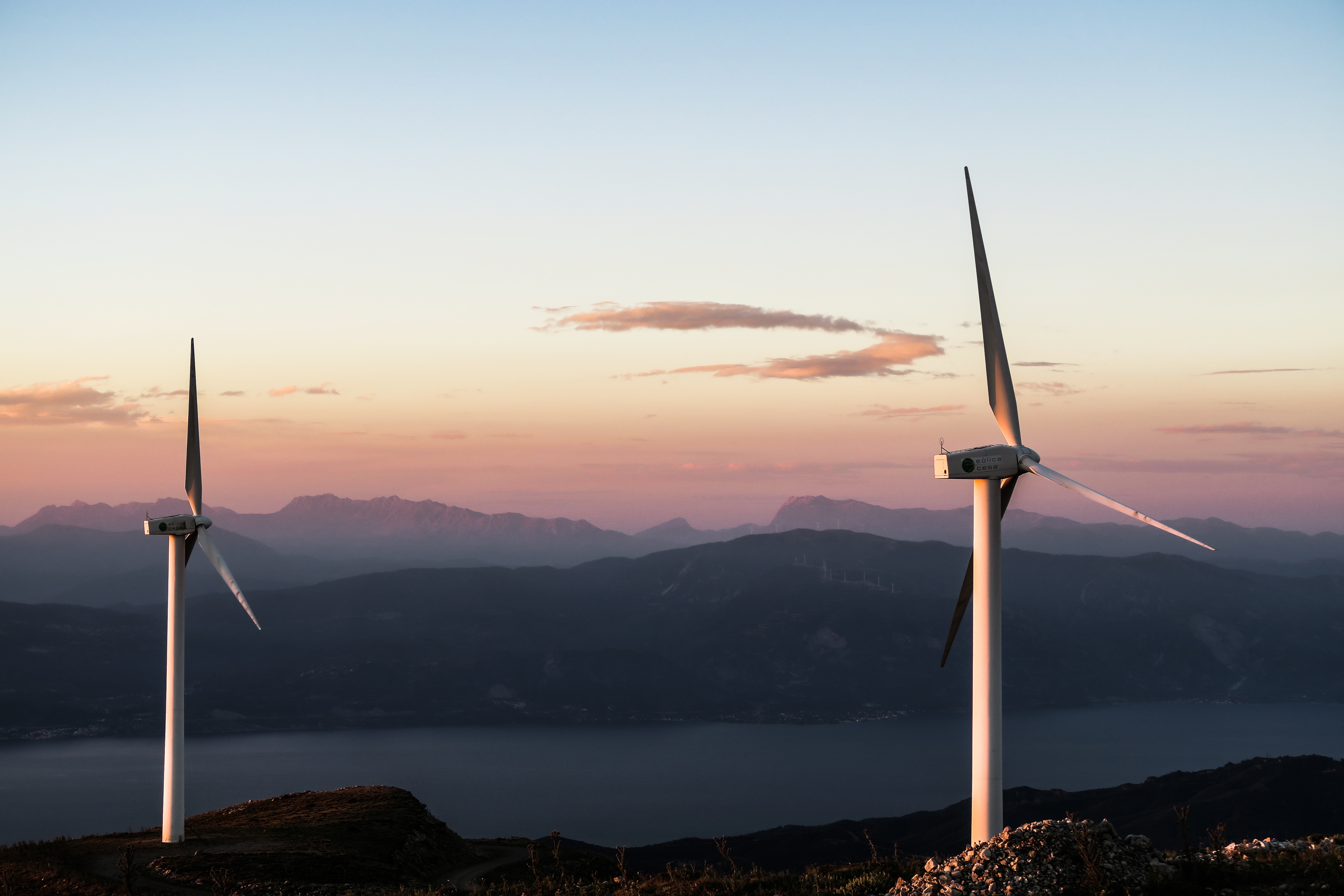