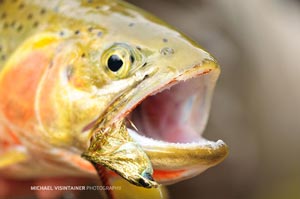 This month the Council began a review of resident fish and sturgeon projects that are implemented and funded through the Council’s Columbia River Basin Fish and Wildlife Program. Resident fish are those that don’t go to the ocean – trout, kokanee, and burbot, for example. In all, 47 projects will be reviewed over the next 10 months. The projects total just over $35 million and represent about 13.5 percent of total program costs. A list of the projects is included with this staff memo.

The review of resident fish and sturgeon projects is the third of four reviews since 2017 of categories of projects funded through the fish and wildlife program. Reviews are complete for the wildlife category, and for the category that includes mainstem program support projects. The sturgeon projects were last reviewed in 2011/2012, and resident fish projects in 2012. Most projects have had multiple reviews by the Independent Scientific Review Panel (ISRP), which reviews proposed projects and reports to the Council before the Council makes project-funding recommendations to the Bonneville Power Administration. The Council conducts project reviews to improve the accountability and transparency of the program; strengthen project design and implementation; contribute to tracking project and program performance; and facilitate information-sharing and adaptive management.

Because the ISRP is specifically charged with reviewing “results of prior year expenditures,” an important function of the reviews is to evaluate project results and determine how well the projects have evolved based on those results, and how well the project sponsors have responded to the scientific and management issues identified in previous Council recommendations reviews.

The timeline for the review calls for sponsors to develop project proposals for work in fiscal years 2021 through 2025. These are due to the Council by January 30, 2020. The ISRP then will conduct a preliminary review and report to the Council in April. Project sponsors will have an opportunity to respond to the ISRP project reviews, there will be a public comment period on the proposals, and the ISRP will issue its final report in July. The Council anticipates making a final decision on the projects in August.