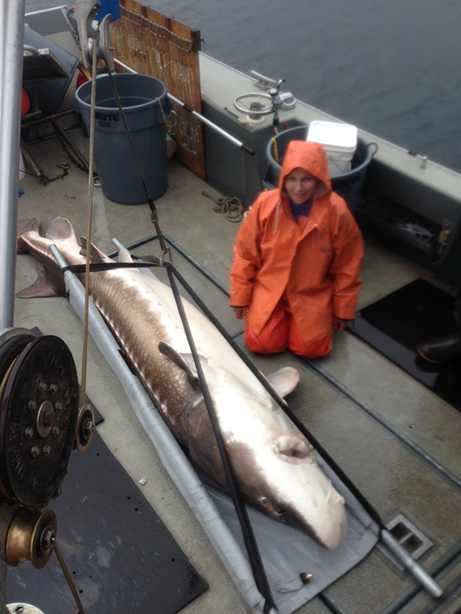 White Sturgeon, the largest and longest-living fish in the Columbia River Basin – they can live 80-100 years – are present in the highest numbers where they can still reach the ocean and movements are not blocked by dams. , state and tribal fish biologists told the Council this month. Progressively farther upriver, the populations become weaker as there are fewer juvenile fish and spawning-age adults. The states and tribes are working to improve the weaker populations and effectively manage the stronger ones, and they are having some successes.

At the April Council meeting, white sturgeon managers each presented a summary of populations in various sections of the river, beginning at the mouth and moving upstream to the border with British Columbia. Here are some of their highlights:

Below Bonneville to the estuary:

The only population with unobstructed access to the ocean, the one downstream of Bonneville Dam, is also the strongest, said Peter Stevens of the Oregon Department of Fish and Wildlife.

“At present, our broodstock numbers are above the conservation status number, about 7,000,” he said.

While the estimated number of fish has declined over the last three years, the overall trend since 2012 is up, he said. Most of the fish – an estimated 63 percent – are juveniles, and while that is a good number, as it shows spawning is successful, the state would like there to be more. Only 1 percent of the population is believed to comprise spawning-age adults. Sturgeon don’t spawn until about 25 years old, and then only about every three years.

“Over the last 10 years the juvenile age class as a proportion of the overall population has been trending down,” Stevens said. “We have an aging population, but we are not panicking yet.”

“We are concerned pinnipeds may be a growing issue in the Willamette. Predation events have increased, as have the number of sea lions,” Stevens said.

Meanwhile, sturgeon upriver from Bonneville face unique challenges. Historically anadromous, fish passage facilities at the Columbia and Snake mainstem dams were not built with sturgeon in mind. Sturgeon have been known to pass through the navigation locks, but other routes are not safe. In trying to pass a dam and reach the ocean they can enter draft tubes, get pulled into the turbine pits, or be left out of the water when turbines are de-watered for maintenance.

“The take-home message is that the sturgeon population in the reservoir behind Bonneville Dam has been stable for a long time,” said Blaine Parker of the Columbia River Inter-Tribal Fish Commission. “The river is very dynamic there, and we theorize those conditions have helped sturgeon spawning.”

The reservoir behind the next dam upriver, The Dalles, however, is a much different story, Parker said. Over time, the sturgeon population has increased a little, but not as much as in the Bonneville pool. Regardless, the fish in The Dalles pool “do pretty well,” he said.

John Day reservoir, the longest and slowest-moving of the three, “is our problem child,” Parker said. “It’s a huge reservoir with few sturgeon. We manage the population carefully, waiting for more spawning. We have targeted this reservoir for hatchery sturgeon to try to level the population and keep it stable over time.”

The number of sturgeon in the reservoir “is an order of magnitude less" than in Bonneville and The Dalles pools, he said.

Sturgeon also are at low numbers in the reservoirs behind Ice Harbor, Little Goose, and Lower Monumental dams on the Snake River – significantly lower than in the Columbia pools, said Laura Heironimus of the Washington Department of Fish and Wildlife. Twenty years ago the number of sturgeon in the pool behind Ice Harbor Dam was estimated at 4,000, and today it is believed to be around 3,000 or fewer.

“Generally, the fish are relatively healthy, but the population has trended downward,” she said. “It is much lower than in the Bonneville pool. Our concern is for slow growth of the fish and recruitment (spawning) failure.” She said biologists believe spawning only has occurred during years of high flow. Fishing has been closed in all three lower Snake reservoirs since 2015.

It’s difficult to be sure, though, as assessments of sturgeon in the three lower Snake reservoirs – stock assessments – have been 15 to 20 years apart, and that is not good for understanding the populations. The fish and wildlife department is working to increase the frequency of stock assessments to every three years in each reservoir.

Sturgeon in Lake Roosevelt behind Grand Coulee Dam and across the border into British Columbia experienced persistent recruitment failure from at least the 1970s, said Andy Miller of the Spokane Tribe. A recovery plan was developed and then revised in 2013. Since then, the Spokane and Colville tribes monitor sturgeon routinely and continue to research reasons for recruitment failure for wild sturgeon.

A hatchery program was developed to release sturgeon into the lake, and survival of those fish has been high – so high, in fact, that in order to balance the hatchery populations among different year classes a fishery was allowed in 2017, and anglers caught 3,500 fish in two months. A total of 150 were harvested in 2018. The tribes harvest about 200 a year for distribution to tribal members. Today it is believed there are about 2,500 wild adult sturgeon in the reservoir.

Aquaculture also has been successful in the Kootenai River, where there is a population of White Sturgeon, listed as an endangered species, that has been landlocked since the last Ice Age. The construction of Libby Dam, completed in 1975, altered flows in the river, reducing the spring freshet that historically was a cue for the fish to move to spawning areas. Very little natural spawning has occurred since, and the fish were declared endangered in 1994.

The Kootenai Tribe of Idaho has been operating a hatchery and working to improve historic spawning areas in the river upstream from Bonners Ferry. One of the important research questions is to investigate what will encourage the wild adult population to move upstream to the improved spawning areas and away from the hardpan clay river bottom downstream from Bonners Ferry where they attempt to spawn now. Enhanced flows out of Libby Dam, operated by the U.S. Army Corps of Engineers, appear to help.

“The Corps was able to give us flows of about 30,000 cfs in 2018, and when we looked at fish movement we saw that about 38 percent of the spawning-age fish moved above Bonners Ferry,” said Ryan Hardy of the Idaho Department of Fish and Game.

Shawn Young, a Kootenai Tribe biologist, said that through the aquaculture program, which now operates out of two facilities in the Bonners Ferry area, the tribe has released 298,000 sturgeon from 24 year classes, creating more than 400 unique sturgeon families ranging in age from 3 to 25 years.

And last year, a milestone: “For the first time we caught a spawning-age adult that we had released as a juvenile,” Young said. “That was pretty exciting for us. We have warded off extinction, and that was the main goal of the program.”

The Council has appointed Patty O’Toole to the position of Fish and Wildlife Division Director. She had been the division’s acting director since August 15, 2019.