Between Castlegar and Revelstoke, British Columbia, the Columbia River broadens into two natural lakes known as Lower Arrow Lake and Upper Arrow Lake. The narrow spot that separates the two lakes is about 42 miles (67 kilometers) south of Revelstoke, just south of the town of Arrow Park.

The Arrow Lakes, well known to early river explorers, were within the traditional territories of several Indian bands. The lakes first were identified on a map in 1832. The name derives from arrows that Indians shot into a hole or a series of fissures in a perpendicular rock on the eastern shore of the Lower Arrow Lake. The Catholic missionary Pierre Jean de Smet, who traveled through the upper Columbia area in 1845/46 wrote in his subsequent book on the Oregon Country missions, “We passed under a perpendicular rock, where we beheld an innumerable number of arrows sticking out of the fissures. The Indians, when they ascend the lake, have a custom of lodging each an arrow into these crevices. This is the reason why the first voyageurs call these lakes the Arrow Lakes.” One early explorer who saw the arrows said they were 30 or 40 feet above the water. According to several versions of the story, an arrow that stuck meant good luck for the shooter, and an arrow that fell meant the opposite. The location was about 25 miles upriver from Castlegar, just north of the Deer Park area.

There are no bridges across the lakes, and no road that runs the length of the lakes, but as with the ferries downriver at Gifford and Keller on Lake Roosevelt, free ferries provide crossings that are de-facto “bridges.” On the Arrow Lakes there are three ferries. Each is operated by the provincial Ministry of Transportation. The Arrow Lakes comprise one of the most scenic areas of the Columbia River. High mountains flank both shores, and many of these, such as the spectacular 8,963-foot (2,732-meter) Mount Begbie southwest of Revelstoke, are snow-capped even in summer. 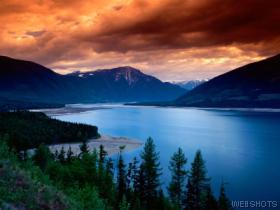 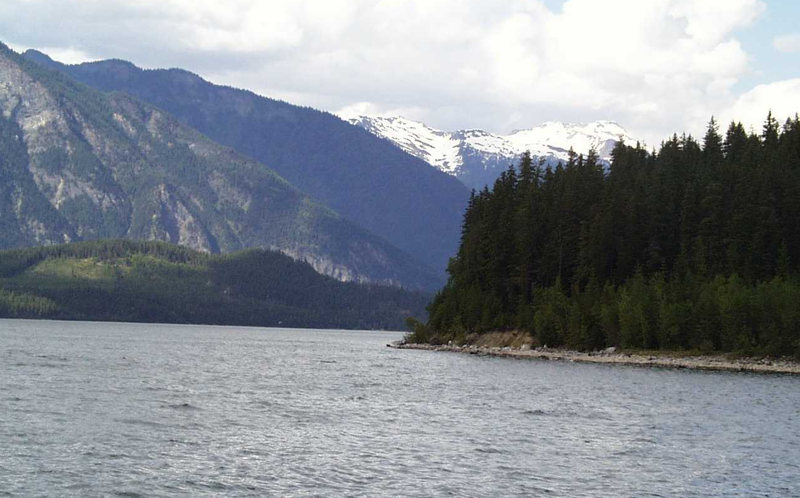 Looking north on the upper Arrow Lake from the provincial ferry crossing between Galena and Shelter bays. Photograph: John Harrison