Astoria, Oregon (map), has an important place in Columbia River history, as it was the first Northwest outpost established by Euro-Americans. The modern Astoria, a city of about 10,000 people, grew up around the original fur-trading post on the south shore of the Columbia 10 miles inland from the Pacific Ocean and the mouth of the river. Astoria was, and is, a fishing town.

The once-remote trading station that grew to be the city of Astoria was founded and named by employees of New York financier John Jacob Astor, president of the Pacific Fur Company. In September 1810, Astor launched expeditions by land and sea to establish the trading post. His supply ship Tonquin, which sailed from New York on Sept. 8, 1810, arrived at the mouth of the Columbia on March 22, 1811, after wintering in Hawai’i. The overland expedition, led by Wilson Price Hunt, was delayed in St. Louis and did not reach Astoria until Feb. 15, 1812.

Astoria and the original Astorians played important roles in the opening of the fur trade in the interior Columbia River Basin, the discovery of what would become a key segment of the Oregon Trail, and the public recognition and promotion of the river’s salmon — the latter thanks to Robert Stuart, who arrived at Astoria on the Tonquin, returned by land to the East the same year, 1812, and wrote in his journal that salmon he purchased from Chinook Indians at Astoria were “by far the finest fish I ever beheld.” In fact, the primary food for the Astorians was fish from the Columbia.

1812 was an important year in Astoria’s history, and for the future of the fur trade in the Columbia River Basin. In that year, war broke out between Great Britain and the United States. At the time, both countries claimed possession of the Northwest — America on the basis of Robert Gray’s discovery of the river in May 1792, and Great Britain on the basis of George Vancouver’s claim on the basis of an exploration of the river by his lieutenant, William Broughton, in October of that same year. The chief problem for the Astorians was not war but survival. Faced with dwindling supplies and isolated on the Pacific coast far from the Pacific Fur Company’s New York headquarters, the Astorians faced the possibility that their fort and assets would be seized by the British — either the Hudson’s Bay Company or its rival North West Company. So rather than give up their fort involuntarily, the Astorians sold it to the North West Company on October 23, 1813, for $58,291. Thus through an act of business, not war, Astoria and its outpost became British less than two years after the Americans arrived. Five years later, as a result of the Treaty of Gent that ended the War of 1812, the two countries agreed, in the Convention of 1818, to occupy the Northwest jointly. Joint occupancy would continue until the 1846 Treaty of Oregon.

The Columbia River salmon canning industry could be said to have started at Astoria. There, the Hudson’s Bay Company began packing salmon for export in 1823. Astoria always has been a fishing town. According to the 1880 census, almost one-fifth of the residents were fishers. Indians and Scandinavians did most of the fishing. Chinese, who had been working in the canneries since 1872, still were prohibited from fishing, yet the census showed that people of Chinese ancestry constituted about one-third of the area’s population.

Not only was Astoria a fishing town, but by the late 1800s it was a pretty rough place. Mont Hawthorne, a Wyoming coal miner who had tired of mining, journeyed to Astoria in 1883 looking for work as a fisherman — something he never had done. Astoria was rowdy, Hawthorne later told author Martha Ferguson McKeown. It was not uncommon in Astoria for men to be kidnapped (“Shanghaied,” Hawthorne called it) onto fishing boats late at night — rather like conscripting a crew. Hawthorne avoided that fate, but he did work in a cannery. In Astoria in 1883, where men more likely had salmon than cash, the one would serve for the other, he recalled: “Each saloon had a special way to attract the fishermen and sailors. Why, there was one girl show down by the docks where, if you didn’t have the money, you could throw a big, fresh salmon into a sort of pen they had beside the ticket-taker and get in that way.”

Salmon canneries were the city’s major industry for decades. But with the steady decline of the salmon runs, the corresponding reduction in commercial fishing in the lower Columbia, and the inevitable shift of commercial salmon fishing to Alaska, the Astoria canneries closed, one after the other. The last one, owned by Bumblebee Seafoods, closed in 1980.

The decline of the salmon runs and salmon fishing hit hard. Salmon fishing not only was the city’s major economic activity, it also was as much a culture as a way of life. In 1996, Jim Bergeron, then the Oregon State University extension agent for commercial fishing, remarked, “My job is like crisis counseling.”

Columbia River salmon rebounded in the late 1990s and early 2000s, but the runs remained far below historic sizes. Astoria’s economy, while still dependent on fishing and fishing-related business, found a new emphasis in tourism. New commercial fishing opportunities were developed, as well, through the Clatsop Economic Development Council net pen facility in Young’s Bay west of Astoria. The Young’s Bay fishery kept the netters away from the mainstem Columbia River and ensured no impacts on the weakest salmon runs.

The modern Astoria is finding new life in tourism and real estate development as people seek vacation homes and modern industries relocate for the quality-of-life benefits of an attractive, sea-coast community. The old Astoria, the city where canneries stood practically shoulder to shoulder along the waterfront and processed millions of pounds of fish annually, the city where commercial fishers could count on seasons lasting more than 200 days every year, that Astoria is gone, probably forever. 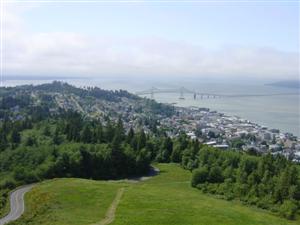