The Council uses an aggregation of multiple models and methods to forecast the energy use for the region. Different types of forecasts are created depending how they are used in the process of developing the plan.

To create a range of load forecasts, three sets of economic drivers are used: trend or base, optimistic (high), and pessimistic (low). The economic drivers translate into increased or decreased energy use by changing a projection on elements in the Energy2020 model like the commercial floor space required. Under each of these three economic-driver-based forecasts we also examine three different climate-change-based forecasts. This gives us 9 different combinations showing a range of economic and climatic conditions. This is done separately for each state and then aggregated to a regional forecast.

Incorporating the Impact of Codes and Standards

Impact on Electricity Use

The figure below shows an estimate of the impact of federal standards and state building codes as of 2019. Without the federal standards, we estimate that by 2041 loads would have been higher by over 3400 average megawatts. In addition, peak loads are lower by over 6500 MW. Note that impact of codes and standards are not static. Over time as consumer decisions of appliance efficiency may exceed codes and standards in-effect. At that point a given code or standard would not lower the demand. Also, impacts for 1990-2018 include impact of observed temperatures in the historic period. Impacts for 2019-2050 incorporate impact of future temperature conditions. The figure and tables below show results at regional level and for medium economic scenario.

Impact of Codes and Standards on Electric Demand 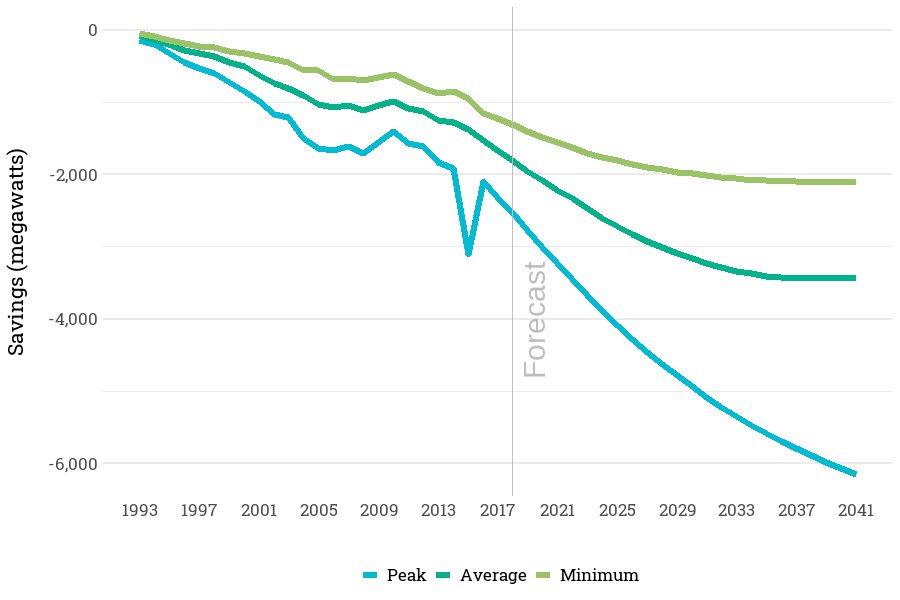 Impact on Direct Natural Gas Use

Impact of Codes and Standards on Demand for Natural Gas (TBTU)

After selecting climate change models that covered a reasonable range of variation in forecast of temperature and precipitation. We calculated the monthly cooling and heating degree days for each GCM. Long-term load forecasting models typically assume average or normal weather conditions in the future. Climate Change forecasting models deal with variations from the normal. The long-term model can simulate load under various economic and temperature conditions. To simulate the impact of temperature on load, the model uses average monthly Cooling Degree Days and Heating Degree Days (base 65 degrees). Demand for space conditioning and water heating is modified based on future CDD and HDD. Given average monthly CDD and HDD for each GCM, the model produces a monthly weather normalized load forecast at state and regional levels. A monthly weather-normalized regional forecast then is converted to hourly loads under different future weather patterns using Council’s Short-term hourly model.

Using an hourly model structure (Short-term Model, STM), the monthly load forecast from Energy2020 is converted to an hourly load forecast. Prior to 2020, STM model had used historic temperature years to study load impacts of past temperature profiles on estimated future loads. This was mainly because there was no long-term forecast of weather conditions. However, now, it is possible to have a trajectory for future daily minimum and maximum temperatures from Global Circulation Models (GCM’s). There are a variety GCM or Climate Change Model’s (CCMs) that produce daily min and max temperature projections. In 2020, and as part of 2021 Power Plan, the model was required to incorporate projections of future temperatures.

The STM produces two sets of outputs: weather normalized and temperature sensitive. A set of hourly weather normalized loads are forecasted and then modified based on a set of temperature sensitivity multipliers that reflect change in loads due to variations in temperature. For a given future year, say 2032, the model produces hourly loads for 2032 under normal weather patterns then it subjects this forecast to 30 different hourly weather patterns projected for years 2020 to 2049. This full range of hourly load forecasts are then used for resource adequacy analysis.

Model Enhancements for this Power Plan

The 2000-2001 Western energy crisis created renewed interest in demand forecasting, and the Northwest’s changing load shape has created a concern about capacity supply. In order to forecast these peaks, the Council relies on end-use forecasting models. Starting with its Sixth Power Plan, the Council selected a new end-use forecasting and policy analysis tool. The new DFS, based on the Energy 2020 model, generates forecasts for electricity, natural gas, and other fuel. The basic version of Energy 2020 was expanded to make sure that the DFS can meet the needs of conservation resource planning. The number of sectors and end-uses was increased. In the residential sector, three building types, four different space-heating technologies, and two different space-cooling technologies, four different water heating types and sizes were tracked. Demand was tracked for electricity for 12 end-uses in the residential sector. New end-uses were added, like information, communication, and entertainment (ICE) devices, which in earlier forecasts did not have a major share of electricity consumption in homes. Technology trade-off curves were updated with new cost and efficiency data.

The industrial sector of the model was updated with new regional energy consumption data. The work on the industrial sector is ongoing and the results of a recent analysis on industrial demand for electricity were added to the demand forecast. The load shape forecasting system was updated with the best available data on end-use load shape from recent Residential Building Stock Assessment (RBSA). This will enable the Council to demonstrate a closer link among the demand forecasting system, the hydro modeling, and the Regional Portfolio Model (RPM).

For this Plan, four major modules of the model were enhanced;

[BK6]Link to Steve’s write ups as appropriate, probably revisit this whole section to make sure it’s not repetitive.