Congress passed the Public Utilities Regulatory Policies Act (PURPA) as part of the National Energy Act in 1978. PURPA was created in part as a reaction to the 1973 oil crisis, when the price of oil skyrocketed in the United States and globally due to an embargo on oil placed by oil-producing Arab countries. Realizing that there was a need for domestic energy security, PURPA was enacted with the goal to conserve electric energy, increase efficiency in the use of facilities (cogeneration, or combined heat and power), and diversify resources by encouraging development of alternative sources of energy from non-utility power producers. PURPA established a class of non-utility generating facilities that, if meeting certain requirements, are permitted to sell the output of their power plants to utilities at the price the utilities would have to pay to develop their own resources – the utility’s "avoided cost." Utilities had to provide non-discriminatory access to the grid and pay for the electricity supplied to them on a projected, fixed cost basis. Eligible generating facilities are known as qualifying facilities (QF) and are defined by two main categories as defined by FERC:

During the first twenty years succeeding the adoption of PURPA, development of qualifying facilities in the Pacific Northwest revolved around hydropower and biomass small power facilities, and coal, natural gas, and petroleum cogeneration facilities. Following a lull in the early 2000’s, the last fifteen years has seen a surge in qualifying facility development with the introduction of wind and then solar renewable resources (see figure below). As the costs of wind and solar declined, it became feasible for small power producers to develop these resources and compete at the utility avoided cost rate.

PURPA Qualifying Facilities Installed in the PNW Since 2000 Of the four states in the Pacific Northwest, Idaho currently has the most installed capacity (megawatts) of qualifying facilities at just over 1,200 MW. Solar has been most dominant in Idaho and Oregon, with QF solar accounting for almost half of the total installed solar capacity in the region. The majority of QFs in the state of Washington consist of cogeneration natural gas plants installed in the early 1990’s. Wind accounts for the majority of qualifying facility capacity in Montana and has recently been the subject of tense deliberations surrounding the eligibility and intention of PURPA.

PURPA Qualifying Facilities in Operation as of 2020, by State 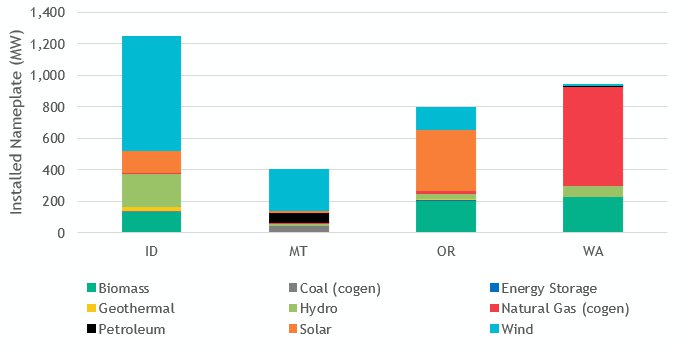 While PURPA is a federal mandate, implementation is split between FERC and individual states, with states responsible for overseeing implementation and enforcement consistent with the federal regulatory framework. This includes interpreting and implementing rules regarding the length of power purchase contracts, avoided cost rate, size of qualifying facilities, and the one-mile rule (which denotes if a facility is considered one project or several individual facilities). With a surge in qualifying facilities seeking applications in the Pacific Northwest (in particular wind and solar), utilities, state regulators, and independent small power producers have increasingly found themselves grappling with implementation and the original objectives of PURPA.

In 2016, the Idaho PUC imposed restrictions on the length of contracts between qualifying facilities and Idaho Power, reducing them from 20 years to 2 years. This effectively torpedoed PURPA qualifying facility development within the Idaho Power service territory as without long-term sales agreements they became increasingly risky to investors.

FERC has recently weighed in on individual state cases, and in July 2020, made significant updates[i]  to some of the key rules that define a facility’s qualifying status. Citing changes in the electricity market since the adoption of PURPA, these updates include giving states the flexibility to allow utilities to pay a varied rate based on wholesale electricity market prices (rather than a projected fixed cost rate) for the electricity supplied by the qualifying facility and reducing the size of a qualifying facility to 5 MW (for small power producers). The effect of these updates remains to be seen, but renewable advocates are undoubtably discouraged as this may make it more difficult for small solar and wind independent power producers to compete.