The 2021 Power Plan is the first to explore the use of hydrogen related technology as a potential clean energy resource. Hydrogen may be especially promising for use in an on-board fuel cell as a replacement for diesel fuel in heavy duty freight transportation, and as a combustible fuel for some high-heat industrial uses. Currently there is limited demand and production in the region, however this may change in the future with the clean electricity grid and state emission reduction goals.

If demand for hydrogen were to materialize and large-scale production in the region was built in response,  the impact on the power system could be huge, in particular on hydro and renewable power solar and wind. Electrolysis, one of the methods to produce hydrogen without emitting carbon, may be useful for balancing load and soaking up excess renewable generation as well.

For the 2021 Power Plan, we considered hydrogen applications in our transportation and end-use load forecast models. For transportation, hydrogen could be used to power on-board fuel cells for vehicles. For the industrial sector, we looked at the impact if hydrogen were to be combusted to generate process heat, thereby acting as a replacement for fossil fuels, or consumed as a feedstock.

The discussion in this section will cover how hydrogen production was incorporated into our planning work. A workbook detailing the hydrogen work can be found here: Hydrogen&FuelCell_Workbook.xlsx. The transportation fuel cell results are covered in the Model Findings, and the Model H2E Case sections. For more information on the industrial uses modeled in the plan, see pathways to decarbonization writeup.

Reaching net zero emission policy targets, such Washington State’s Climate Commitment Act SB 5126, is going to take innovation. A full green electrification of all current fossil fuel applications may be problematic or very expensive – an alternate clean fuel like hydrogen could prove to be a valuable strategic tool for reducing carbon from the energy system.

The term Hydrogen Economy envisions a full transition to a new energy system with hydrogen at the center. Corporations that produce, store, and use hydrogen have been raising serious capital in recent years,  enough to kick-off large-scale projects. Production of green hydrogen via electrolysis requires consumption of renewable energy, and with a large-scale renewable power buildout on the horizon there may be plenty of low-cost renewable electricity soon available. Large scale infrastructure to support significant use of hydrogen is at least 10 years off – one key factor is how much existing infrastructure (gas pipelines, storage features, gas filling stations) could be re-purposed for hydrogen.   Hydrogen may also wind up as just a niche player, concentrated to a few certain sectors such as transportation and industrial.

A few facts about hydrogen – it’s the lightest and most abundant element in the universe. On Earth it tends to bond with other elements often forming hydrocarbons and water. When hydrogen is at standard temperature and pressure, it is a nontoxic, colorless, odorless, and highly combustible gas – and since it’s so light, it can be a mischievous escape artist. The energy density of hydrogen on a per kg basis is very high – higher than petroleum products like gasoline and diesel. However, the energy density on a per volume basis is much lower than petrol. To transport, hydrogen requires compression or liquefaction

NASA has been using liquid hydrogen as rocket propellant since the 1950s, and developed hydrogen fuel cell technologies decades ago. Hydrogen is currently used as a feedstock for many industrial applications, for example, synthesis of ammonia – NH3 – which combines nitrogen with hydrogen. It is also used in oil refining and plastics. Oil producers in Texas have established hydrogen systems for refining – including hydrogen production, storage in underground salt dome caverns, and dedicated hydrogen pipeline networks. Virtually all of the hydrogen produced for industry today is done via steam methane reforming – which briefly can be described as a process to separate hydrogen from natural gas (CH4) using very high temperatures. The process emits CO2 and is considered as gray hydrogen.

Though the hydrogen economy is in a nascent stage, activity is beginning to pick up. According to the US Department of Energy, there are at least 43 retail hydrogen filling stations operating now in the US, most of which are in California[1]. Here in the Northwest, Douglas County P.U.D. has broken ground on the first electrolysis plant in the region with plans for a hydrogen fueling station[2]. Once completed, the SGH2 Energy Lancaster project in California could be the largest green hydrogen plant in the world and would use green waste rather than electrolysis to produce hydrogen[3].

Electrolysis is performed by an electrolyzer, which uses electricity to split water into hydrogen and oxygen. Many companies are now making electrolyzers which can be scaled from small appliance sizes to large-scale centralized systems; current technologies include:

In turn, a fuel cell uses the chemical energy in hydrogen combined with oxygen to generate electricity, with heat and water as an output. Therefore, fuel cells can be used to produce electricity without combustion and carbon emissions.

Heavy duty vehicles such as trucks over 26,000 lbs. may be an especially good fit for hydrogen fuel cells. The fuel cell technology provides long haul range with a curb weight half of that of a battery electric truck – therefore a fuel cell truck could deliver a higher payload with a longer range than that of the electric.

However, there is limited availability of both hydrogen filling stations and fuel cell vehicles, and when compared to gasoline, diesel and electricity, the fuel is very expensive. But that could change. One other note, the vehicle fueling chain requires several steps – water source & electrolysis, high pressurization or liquification of the gas to transport, and trucking to station. Each step requires energy expenditure.

Hydrogen may also be combusted to generate electricity and/or heat. In the industrial sector, hydrogen could be used as a heating fuel where electrification may not be adequate for high temperature processes such as steel and cement production. It also could directly replace fossil fuel as feedstock for oil refineries and chemical plants.

In the power sector, similar to natural gas, a hydrogen burning combustion turbine (CT) combined with storage could provide dispatchable generation for the grid and long-duration storage. If the hydrogen combusted is green – this would be relatively emission free power (depending on how the hydrogen was compressed or liquified).

However, there are concerns with using hydrogen or hydrogen/natural gas blends in CTs for electricity generation. Combusting hydrogen generates high levels of NOx – a pollutant formed from burning fuel at high temperatures. This issue may require additional NOx control technologies at the power plant level. Mitsubishi Power (MHPS) has a number of large-scale projects that use green hydrogen stored underground and burned in large CT power plants. Initially the projects would use a hydrogen-natural gas blend with a transition to 100% hydrogen over time.

Just some of the potential hydrogen applications are summarized in the figure below. 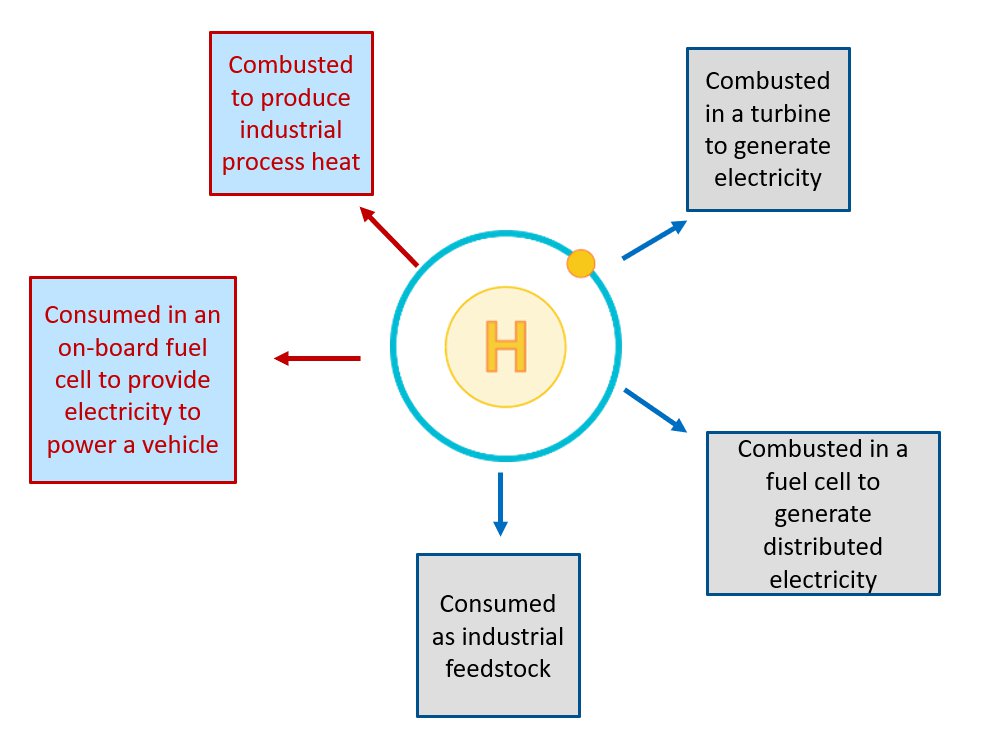 Hydrogen and The Power Plan

To study the impacts of hydrogen in the 2021 Power Plan, we focused on two sectors: transportation and industrial. For transportation, a case study was developed to look at the impact of moving heavy duty vehicles to hydrogen fuel cell technology, thereby replacing diesel fuel demand with hydrogen. The electricity required to meet the hydrogen demand for transportation was calculated as the sum of the electricity requirements from electrolysis and delivery preparation.  For industrial uses, it was assumed that the hydrogen would be sourced from a mix of on-site electrolysis production and off-site centralized production and delivery. More details about the implementation are discussed later in this section.

The table below shows a quick comparative calculation for a hydrogen fuel cell vehicle and a plug-in battery electric vehicle. An estimate comparing the electricity requirements shows that the plug-in battery electric is nearly three times more efficient in terms of miles per kWh. However as mentioned earlier, fuel cell vehicles can provide longer range.

Hydrogen Production and Demand for Electricity

An estimate was developed for the power plan to determine the electricity required to produce hydrogen and deliver to filling stations for transportation, and for heating or feedstock use at industrial sites. This estimate assumes electrolysis is used to produce the hydrogen, drawing on electricity from the regional grid. Based on judgement from research, it’s assumed that efficiency improvements will occur over time if hydrogen production is scaled up.

The next table displays the estimate in terms of a rate of electricity use (kWh) per unit of hydrogen (kg) demand. There are two components to the estimate:

The delivery component for transportation assumes a 50/50 mix of delivery prep options for hydrogen (H2) product: compressed gas and liquification. For industrial, an assumption that 80% of the H2 is produced on site, while the rest is delivered similar to transportation.

Note that is a rough estimate; there are no large-scale hydrogen production and delivery systems currently operating in the Northwest.

A list of materials that informed development of the estimate is included below.

Estimate of Electricity Requirements for Hydrogen Production and Delivery