Looking Beyond the Region: US and the Western Interconnect

The United States generating portfolio contains the same resource types as the region, however at significantly different proportions and magnitudes. The three dominant resources in the United States over the past 25 years have been coal, nuclear, and natural gas, with wind and solar entering the picture with increasing contributions in the last decade. Whereas the region relies on hydropower to contribute on average 50% of the annual energy supply, in the United States, hydropower only contributes on average 6%. The region’s carbon emissions are tied directly to hydro conditions, but at the national level, hydropower plays a much smaller role and therefore contributes to much less variation in emissions from year to year. 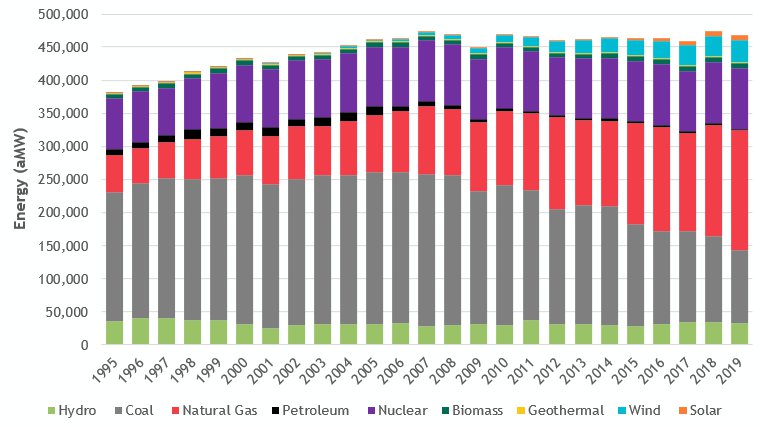 In 1995, coal accounted for about half of the nation’s generation, with nuclear second, and natural gas third. Over the years, additional natural gas resources have been developed and come online, contributing to more and more overall generation. Similar to the fossil fuel trends in the region, over time coal has been dispatched less in favor of cheaper natural gas generation. By 2019, coal accounted for 23% of overall generation, compared to natural gas’s 38%. This change has been the key driver in the nation’s declining power plant emissions. As more coal units retire, this trend will continue; however similar to the region, it all depends on the replacement resources that are developed.

United States carbon emissions from the electricity sector (at the point of combustion) have been declining steadily. In 2019, emissions were 1,724 million metric tons, 32% lower than peak emissions in 2007. In 2018, severe weather conditions led to higher heating and cooling loads, which in turn led to increased use of fossil fuel resources and therefore an increase in emissions. This is interpreted as a blip in an overall downward trend in emissions. Because hydropower plays a much smaller role in the Unite State’s resource portfolio, there is not the same variability from year to year like we see in the Pacific Northwest. Rather, declining emissions can be directly attributed to the change in fossil fuel dispatch and greater reliance on the less carbon intensive natural gas resources over coal.