Looking Beyond the Region: US and the Western Interconnect

The Western Interconnect, or Western Electricity Coordinating Council (WECC), encompasses the states of Washington, Oregon, Idaho, W. Montana, California, Nevada, Wyoming, Utah, Colorado, Arizona, New Mexico, a small portion of Texas, the Canadian provinces of British Columbia and Alberta, and a small portion of Baja Mexico. As of 2020, the installed nameplate capacity in the WECC was just about 270,000 megawatts. The majority of nameplate capacity was natural gas (38%), followed by hydropower (25%), wind (11%), coal (10%), and solar (8%). In terms of annual generation, from 2012 through 2018, fossil-fueled resources contributed to about 50% of supply – varying from year to year based on hydro conditions (hydropower produced 24% to 30% of annual energy across the same years). Renewable resources have increased contributions, with solar producing less than 1% of the total generation in 2012, to 5% in 2018, as new solar has been developed and deployed. Similarly, wind has increased its contribution to annual energy, hitting 7% of WECC’s production in 2018. Nuclear and geothermal are fairly consistent over the years, with contributing a steady 7% and 2% annually (respectively). Over the next decade and beyond, the annual generation profile is set to change – primarily due to retiring coal plants and expected significant additions of renewable and clean resources in response to clean policies and changing economics. The role of natural gas in this future remains uncertain with state policies varying regarding their usage of existing gas and development of new gas. California is undergoing a transition away from once-through-cooling (OTC) power plants (as of 2010, about 20,000 megawatts utilized this technology), which will result in the retirement of two major nuclear units as well as retirement or conversion (phasing out OTC technology) of natural gas plants. 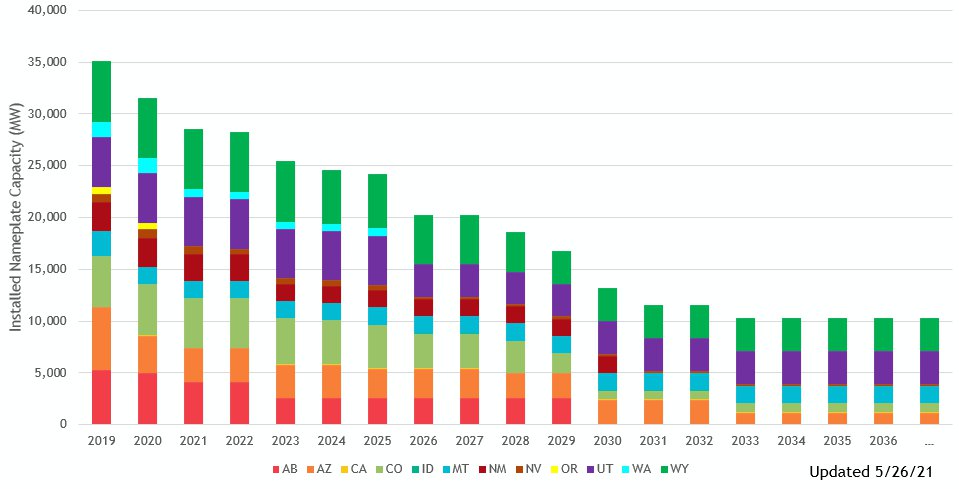