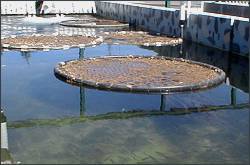 Beginning in 1982 the program initiated extensive efforts to boost artificial production of salmon and steelhead, primarily through the experimental technique of supplementation, which means incubating fish in the protective environment of hatcheries, acclimating them to conditions they will face in the wild, and then releasing them into streams and rivers to rebuild naturally spawning populations. Although still being evaluated by the scientific community, supplementation is thought by many to help rebuild genetically distinct populations of fish and increase the diversity of life history types and species in order to sustain a system of populations in the face of environmental variation. This includes intensive rescue efforts for the weakest runs, such as Snake River sockeye salmon, which are raised to adulthood and spawned in the protective hatchery environment. The progeny of these few fish then are released into tributary lakes to attempt to re-establish naturally spawning populations. Supplementation techniques also include raising fish to release into streams to rebuild naturally spawning runs where none exists currently. There are major supplementation facilities for salmon and steelhead funded by Bonneville through the Council's program in Columbia and Snake river tributaries in Washington, Oregon and Idaho.

The program directs the construction and operation of fish hatcheries to 1) complement habitat improvements by supplementing native fish populations up to the sustainable carrying capacity of the habitat with fish that are as similar as possible in genetics and behavior to wild native fish; and 2) replace lost salmon and steelhead in blocked areas. This is a shift in artificial production philosophy from traditional hatchery practices, which focused on replacing salmon and steelhead lost to construction of dams with sufficient numbers of fish to supply commercial fisheries in the lower Columbia River. But the program does not discount the importance of fisheries. In fact, the Council is required by the Northwest Power Act to include measures in the program that complement the existing and future activities of the region's fish and wildlife agencies and Indian tribes, and these entities certainly have an interest in fisheries.

To this end, the program recognizes the value of hatchery production for the purpose of supporting fisheries – Throughout the Columbia Basin, not just in the lower river. To reconcile these sometimes competing objectives – rebuilding naturally spawning runs and also providing fish for harvest – the program initiated a thorough review of artificial production at the request of Congress. A panel of experts appointed by the Council worked with the region's fish managers to identify and review the purposes of all fish hatcheries in the Columbia River Basin and suggest operational changes consistent with the goals and objectives of the fish managers for rebuilding runs, providing fish for harvest and preserving the genetic integrity of wild and naturally spawning fish. The Artificial Production Review and Evaluation was completed in September 2003. Artificial production expenditures through the program since 1982 total more than $350 million.