The fish and wildlife program initiated improvements in fish passage at dams including increased flows to help juvenile fish migrate between the dams, construction of juvenile fish bypass facilities at the dams and a coordinated program of spilling water over dams for the benefit of fish that don't go through bypass facilities.

To boost flows between the dams, the 1982 program created the water budget, which is an amount of water reserved in upriver storage reservoirs in winter and then released in the spring and early summer to help boost river flows at the time when juvenile salmon and steelhead are migrating to the ocean. In subsequent revisions of the program, the Council increased the size of the water budget from its initial 3.45 million acre-feet to about 12 million acre-feet, when that amount of water is available. The current federal biological opinions establish flow standards that accomplish the same purpose as the water budget. The average is between six million and eight million acre-feet per year. 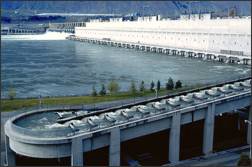 The 1982 program also called for installation of juvenile fish bypass facilities at the mainstem dams and for water spills at the dams to pass juvenile fish while the facilities were under construction. In 1984 the Council amended the program to call on the U.S. Army Corps of Engineers, the federal agency that owns and operates the dams, to develop coordinated interim juvenile fish passage plans, including spill, while it developed solutions to fish passage problems at five dams on the lower Snake and Columbia rivers. In later years the Council established standards for fish passage efficiency and fish survival at the dams through the use of mechanical bypass facilities and spill. The current version of the program, amended in 2003 with specific recommendations for the mainstem dams, calls for dam-by-dam studies to determine the most efficient level of bypass spill in order to maximize passage efficiency and fish survival and preserve water for hydropower generation when it is not needed for spill.

Juvenile fish bypass facilities have been improved or installed at seven of the eight dams on the lower Snake and Columbia rivers.

These bypass facilities and other measures have improved the survival of juvenile fish to the point that survival today is as high, or higher, through the eight dams than it was in the 1960s when only four dams were in place, according to NOAA Fisheries. Only The Dalles Dam does not have screens or a bypass system, but its ice and trash sluiceway has been used effectively for juvenile fish passage, and screens and a bypass system are being designed. Screens and bypass systems have been studied or tested at the five mid-Columbia dams owned by public utility districts. Recently, surface bypass technology, which means passing fish over a dam close to the surface of the river rather than forcing the fish to dive 40 feet or so to the level of the spillway, has been tested at Lower Granite Dam and will be tested at Bonneville Dam. This technology has promise for passing juvenile fish effectively with less water than spillway passage.

The program also provided funding for efforts to reduce predation on salmon and steelhead. Reservoirs behind dams provide ideal breeding habitat for predator fish such as northern pikeminnow. The program funded a multi-year project that successfully reduced pikeminnow populations through a bounty reward fishery. The program also funded an effort to reduce predation by birds, particularly Caspian terns in the Columbia River estuary.

The program recognizes that dam operations also affect resident fish (these do not migrate to the ocean) and wildlife. Through the program, the Council directed the Corps of Engineers, which operates Libby Dam, and the Bureau of Reclamation, which operates Hungry Horse Dam, to provide habitat conditions in the reservoirs above the dams and the rivers below them that are necessary to restore populations of native fish to self-sustaining levels capable of supporting harvest. Both dams are in Montana, where there are no salmon. These dam operations include improving the seasonal pattern and stability of river discharges and reservoir conditions. The Council also directed the Bureau to operate Grand Coulee Dam in a manner that provides conditions necessary to protect spawning and rearing habitat for fish in and adjacent to Lake Roosevelt in order to build fish populations to levels capable of supporting harvest consistent with the goals of the Spokane and Colville tribes. The program includes other measures to protect and enhance resident fish and wildlife affected by the construction and operation of dams elsewhere in the Columbia River Basin and also recognizes that for some species, such as waterfowl, the creation of reservoirs and the inundation of shoreline areas increased wildlife habitat.

Expenditures in the mainstem Columbia and Snake rivers, not including fish passage facilities, lost hydropower income and power purchases in response to river operations to protect fish, such as spill, total more than $200 million since 1982.