Fall Chinook salmon are returning to the Columbia River this year and crossing Bonneville Dam in numbers not seen since the dam was completed and counting began in 1938.

The Bonneville count of adult and jack fall Chinook has already passed 920,000 fish with about a month left in the run. The run is expected to top one million fish, nearly 400,000 more than any previous year in 75 years of fish-counting at the dam. In one day, Sept. 9, 63,780 fall Chinook were counted crossing the dam. Chinook returning to tributaries in the 140 miles of river downstream of the dam add to the huge run.

“The abundance of this year’s fall Chinook run is the perfect example of what this region needs to focus on and how we all benefit from strong returns,” said Paul Lumley, executive director of the Columbia River Inter-Tribal Fish Commission. “Partnerships and collaboration are rebuilding this run. Focusing on rebuilding abundance allows the region to move beyond unproductive allocation fights and puts fish back on to the spawning grounds.”

“This historic run is an encouraging sign that regional efforts to rebuild salmon populations are having a positive impact,” said Bill Bradbury, chair of the Northwest Power and Conservation Council, whose Columbia River Basin Fish and Wildlife Program directs funding for many of those efforts. “By improving spawning and rearing habitat and carefully supplementing naturally spawning runs with hatchery-bred fish, we are not only boosting the runs but also providing fishing opportunities that contribute to our economy.”

In addition to fish returning to spawn in the lower Columbia, the fall run includes wild fish headed to the Hanford Reach, the free-flowing stretch of the Columbia downstream of Priest Rapids Dam. The run also includes wild and hatchery fish returning to production facilities, release sites, and tributaries in central Washington along the Columbia, and southeastern Washington and central Idaho on the Snake River.

State and tribal biologists attribute the historic run to various factors, including high spring river flows when the fish migrated to the ocean as juveniles two to five years ago, spill of juvenile fish over dams, good ocean conditions, ongoing projects to improve fish passage at dams and the habitat where fish spawn, changes in harvest management to protect weak stocks, and improved production and survival of fish produced in hatcheries. Included in the huge run is an anticipated record return of fall Chinook to the Snake River, where the Nez Perce Tribe and many other partners have been working to improve fish production and habitat. 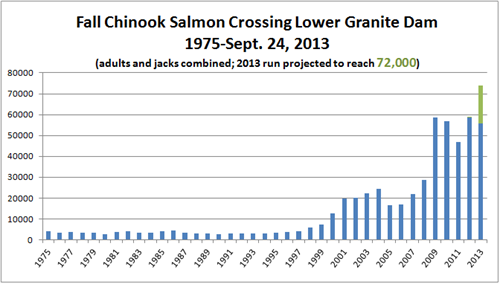