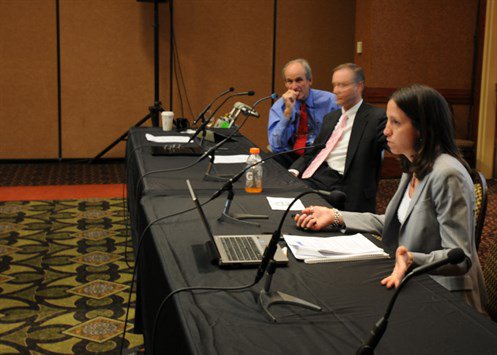 The Council's June 4 symposium on greenhouse gas emissions by the electricity sector brought utility, state and federal agency, and energy groups together to discuss the challenges surrounding this key planning issue.

Speakers included Elizabeth Kopits, an economist with the Environmental Protection Agency, who described the federal interagency approach to estimating the social costs of GHG emissions--something the Obama administration has made a priority. She provided an overview of the different models used to calculate costs, including updated analyses and cost estimates that were released at the end of May.

In terms of how the Council could use this information in developing the Seventh Power Plan, Kopits said it could help calculate the social benefits of GHG reductions on an incremental basis.

Panels addressed how state agencies and utilities are dealing with the GHG issue. While there are different perspectives and approaches depending on their respective responsibilities, common themes emerged: Retirement of aging coal plants and the growing role of natural gas-fired generation, as well as an emphasis on energy efficiency and development of renewable resources to meet renewable portfolio standards.

Clint Kalich of Avista noted in his presentation that "We're facing a different wholesale market with carbon costs." In his estimation, mandating renewable portfolio standard targets was the least efficient way to reduce emission levels. "Retiring coal plants is better,” he said “but maybe we need to ask ourselves if there isn't a better way to do it."

As if to illustrate this point, Dave Clement of Seattle City Light said that his utility’s lowest net cost portfolio included wind generation and natural gas. Although it had higher CO2 costs than the portfolio with renewable resources and energy efficiency, the ability to sell their surplus generation offset those costs.

The possible effects of climate change on the hydrosystem were also discussed. Reduced snowpack and earlier runoff, combined with warmer summers, have been forecast as potential consequences.

The Council has scheduled more symposiums on key topics that will help in developing the next power plan. We’d like to hear your thoughts. What did you find most interesting? Add your take on the information and continue the conversation.