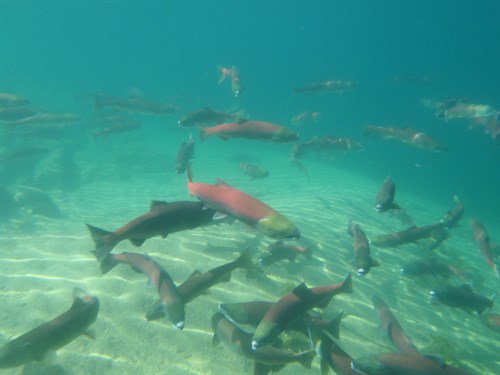 These sockeye salmon have returned to Redfish Lake in Idaho to spawn, produced and supported through a project in the Council's fish and wildlire program.

The Northwest Power and Conservation Council received 481 recommendations to amend its Columbia River Basin Fish and Wildlife Program by the September 17 deadline for proposals. The recommendations addressed a broad number of issues, including protected areas (protected from future hydropower development), blocked-area salmon reintroduction, spill at dams to help juvenile fish migrate to the ocean, hatchery policies and practices, habitat improvements, toxic contamination of rivers and streams, climate-change impacts on fish and wildlife, and the effects of invasive aquatic species including zebra and quagga mussels.

The Council’s fish and wildlife program directs more than $250 million a year to mitigate the impacts of hydropower dams on fish and wildlife in the Columbia River Basin and is funded by the federal Bonneville Power Administration.

The Council posted the amendment proposals on its website and is accepting public comments on them through November 20. The Council plans to produce a draft amended program for public review and comment on February 17, 2014 and adopt the final program revision on July 17.

Some proposals, including one from American Rivers, encourage the Council to write into the program a spill experiment as recommended by federal, state, and tribal biologists through the Comparative Survival Study as a means of testing whether increasing spill leads to increased survival of juvenile salmon and steelhead. The Council also is urged to play a role in restoring more natural floodplain functions on the mainstem Columbia River by writing into the program dam operations that yield a hydrograph closer to that of a natural river.

Many proposals recommend that the Council maintain, strengthen, and expand the protected-areas rule, and also endorse the reintroduction of salmon and steelhead into areas blocked by dams, such as above Chief Joseph and Grand Coulee dams. Proposals also recommend that the program endorse further research and actions to adapt to impacts of climate change on fish and wildlife, including altered river flows and habitat.

The Bonneville Power Administration recommended the program incorporate, as it has in the past, the spill and dam-passage strategies, performance standards, and inriver survival targets for ESA-listed salmon and steelhead reflected in the 2008 Federal Columbia River Power System Biological Opinion. Bonneville also recommended that the program streamline the Independent Scientific Review Panel (ISRP) process for reviewing projects that implement the program and also continue to support the use of hatcheries to reintroduce and reestablish extirpated runs and species (a technique known as supplementation) and to raise fish to substitute for salmon in blocked areas.

The Columbia River Inter-Tribal Fish Commission (CRITFC) also supported supplementation, recommending that the Council “support hatchery programs that make progress to recover and rebuild salmon runs, such as supplementation, and question all other programs as a risky foundation for restoration.” CRITFC also recommended that the program put more emphasis on reducing toxic contamination that affects fish. Dams contribute to water toxicity by trapping contaminated sediment and by reducing dissolved oxygen levels, according to the CRITFC recommendation.