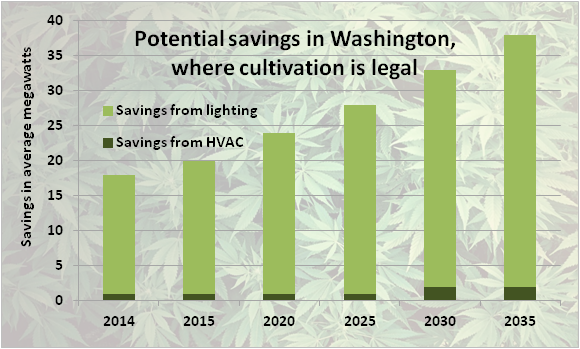 Growing marijuana indoors, now legal in Washington state, is an emerging use of electricity in the Pacific Northwest that could grow to the equivalent of a small city over the next 20 years, according to an analysis by the Council.

According to the analysis, the anticipated amount represents about 80-163 average megawatts of new demand for the region’s power system. Energy efficiency improvements, such as switching to energy-efficient lights, could reduce power consumption by half. Lighting is about 80 percent of the energy cost of indoor marijuana cultivation. Other improvements in heating, ventilation, and air conditioning systems could also reduce electricity use for that equipment by 10 percent.

These new sources of electricity use — others include plug-in electric vehicles and data centers like those already built in the Northwest by Apple, Google, Microsoft, and Facebook — will be evaluated as part of the Council’s upcoming Seventh Power Plan, expected to be completed in late 2015. The plan is developed with broad participation by the public to ensure the region’s power supply. A cornerstone of the plan is a least-cost, least-risk resource strategy to meet the predicted demand.

Data for the analysis was provided by Xcel Energy in Colorado, where marijuana cultivation is also legal, the Washington Liquor Control Board, which regulates marijuana growing operations in that state, and other sources.