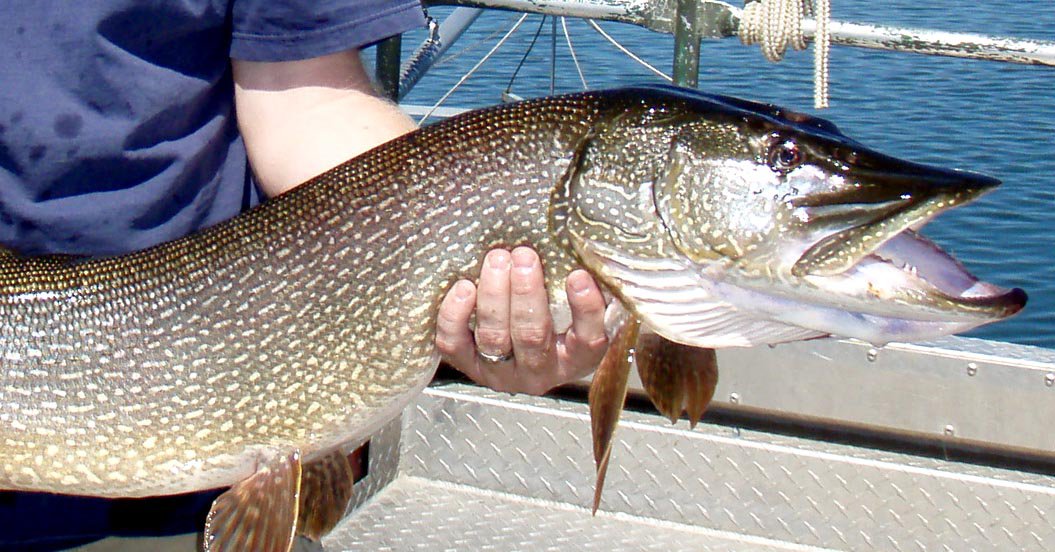 Northern pike, a voracious predator, are migrating into the upper Columbia River from the north and east, posing a threat to state and tribal efforts to protect and restore native sturgeon and trout species in Lake Roosevelt, the reservoir behind Grand Coulee Dam. Tribes and state fish and wildlife agencies, joined by their counterparts in British Columbia, are mounting an assault on the big fish – they can grow to more than 30 pounds and a meter in length – hoping to halt their spread before they do real damage to recreational and tribal fisheries in the lake, and possibly farther downriver.

Pike probably can’t be eliminated, but they can be managed and the population reduced significantly, Joe Maroney, Director of Fishery and Water Resources for the Kalispel Tribe, said. He added metaphorically, “we’re going to be continually mowing the grass, trying to keep it as short as possible, and we are approaching that.”

Northern pike, an introduced non-native species, were detected in Box Canyon Reservoir on the Pend Oreille River in 2004, probably having migrated downstream from Lake Pend Oreille. Pike also are present in Lake Coeur d’Alene, whose outlet is the Spokane River; in British Columbia downstream of Keenleyside Dam; and in Montana.

The Kalispel Tribe, whose reservation borders the Pend Oreille River in Washington, has documented exponential growth of the population from 400 adult fish in 2006 to 5,500 in 2010, along with an expansion of their range within the river.

Pike were first detected in Lake Roosevelt, the reservoir behind Grand Coulee Dam, in 2009, and they are not welcome, as they prey on salmonids that are being raised for fisheries and restoration purposes. Their preference for salmonids is not good news for Lake Roosevelt, where rainbow trout, mountain whitefish, and kokanee – all salmonids -- made up 76 percent of the pike diet in the reservoir in one study. Significant investments in fish restoration in the Columbia and Pend Oreille rivers are aimed at salmonids.

Fishery managers in British Columbia and Washington began working to suppress pike in 2012. Pike are popular with recreational fishers; there is no catch limit in Idaho or Washington. So far the best fishing, and therefore the highest concentration of pike, has been in the Columbia near Kettle Falls, and in its Kettle River tributary.

The Council is concerned about the proliferation of northern pike because of the potential to disrupt and set back ongoing electricity ratepayer-funded efforts to restore fish runs and enhance fisheries throughout the Columbia River Basin. If the downstream migration continues, pike could threaten salmon and steelhead recovery and reintroduction efforts downstream of Chief Joseph Dam.

“My big concern is sockeye at the mouth of the Okanagan River,” Maroney said. “You should be afraid, very afraid,” he said, half jokingly. “You don’t need to study them to death. If you find them, you need to kill them. Time is of the essence.”