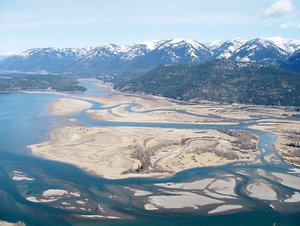 The Idaho Department of Fish and Game (IDFG) is working to protect the Clark Fork River Delta, an important riparian and wetland habitat for fish and birds in Lake Pend Oreille, from the effects of erosion caused by the operations of two dams, one upstream on the Clark Fork River and the other at the outlet of the lake.

Speaking at the June meeting of the Northwest Power and Conservation Council in Coeur d’Alene, IDFG regional supervisor Chip Corsi said the goal of the restoration project is to protect areas vulnerable to erosion while improving and diversifying key riparian and wetland habitats to restore ecological function in the delta. This is being done by protecting existing areas within the delta from further erosion using environmentally compatible stabilization methods, and restoring and enhancing the edge and interior areas of the delta by increasing habitat complexity with large woody debris and planting diverse types of native vegetation including black cottonwood, dogwood, and willow; and removing non-native invasive reed canarygrass.

The first phase of the project, which includes planting about 100,000 native shrubs and trees, is nearing completion. In all, the project will convert approximately 169 acres of mudflat or lake bottom to usable habitat while reducing the potential for future erosion.

“This project is a gem, one that is preserving an important environment and one that has enjoyed the dedication and determination of a diverse group of partners, including local, tribal, and federal governments, as well as support from electric utilities, citizen groups, and lake property owners,” said Bill Booth, an Idaho member of the Council who helped organize and coordinate the project.

The Clark Fork River delta connects mountain ranges near the lake, providing nutrient and sediment transport, improving water quality, and providing essential cover and feeding areas for migrating and breeding songbirds, waterbirds, waterfowl, raptors, and numerous other wildlife species. The delta also is culturally important to the Kalispel, Kootenai, Coeur d’Alene, and Salish and Kootenai tribes, and to communities in the area.

Partners in the project with IDFG include the Council, Bonneville Power Administration, Avista Utilities, operator of Cabinet Gorge Dam on the Clark Fork River; the U.S. Army Corps of Engineers, operator of Albeni Falls Dam at the outlet of the lake; Ducks Unlimited, the Kalispel Tribe, and others including nearby communities.