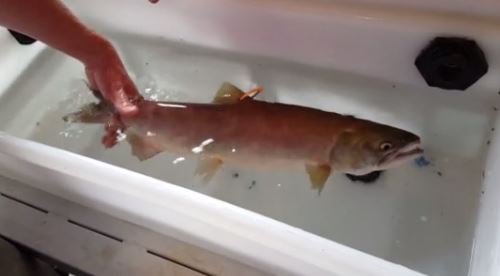 Here, Dan Baker, manager of the Eagle Hatchery, describes captive Snake River sockeye in a tank at the facility.

From the brink of extinction, the world’s longest-migrating, highest-climbing, southern-most run of sockeye salmon is making a steady comeback, thanks to an extraordinary partnership of state, federal, and tribal fishery experts.

Snake River sockeye, which migrate 900 miles to and from the Pacific Ocean from spawning grounds more than 6,000 feet in the mountains of central Idaho, had declined to just a handful of fish by 1991 as the result of a variety of impacts such as overfishing, habitat alterations, and the impacts of dams including one that blocked the Salmon River for decades. That year, Snake River sockeye were listed as endangered under the Endangered Species Act, and the rescue effort — already under way — accelerated.

From just 16 wild adult fish returning from the ocean between 1991 and 1998, plus 886 wild smolts that were collected from Redfish Lake and surrounding habitats between 1991 and 1993, and 26 “residual” (non-ocean-going) sockeye collected in the same area, fish habitat and production experts and geneticists mounted a program that today is on the cutting edge of species recovery in the world. As genetic techniques have improved over the last 30 years, the sockeye rescue effort is able to control individual fish parentage with such precision that fish fish produced today are nearly identical to the founding 16 wild fish.

To avoid the risk of catastrophic loss, annually equal brood lots of eggs — about 500 in each lot — from both captive-reared and ocean-return adult fish — are developed at the Eagle Fish Hatchery of the Idaho Department of Fish and Game near Boise. One group is incubated and reared at the Eagle facility and the other is raised at the Manchester Research Station of NOAA Fisheries in Port Orchard, Washington, on Puget Sound.

The value of that redundancy was clear this summer as the Columbia River turned lethally warm for salmon and steelhead during July when sockeye return from the ocean. More than a quarter million sockeye that were counted at Bonneville Dam failed to cross McNary Dam 125 miles upstream. Most of the Columbia River sockeye return to the Okanagan and Wenatchee rivers, but the run also includes the endangered Snake River fish.

This sockeye is one of 51 collected at Lower Granite Dam this year and taken to the Eagle Hatchery as an emergency measure.

Ocean-returning adults will be incorporated in spawning plans at the Eagle facility. Eggs from these spawn crosses will be divided between the Eagle facility and Manchester where some will be reared and reserved for the ongoing captive broodstock program, and others will be reared and released to spawn in the wild. To date, more than 10,000 adult descendants have been raised from the original 16 wild adults.

Over time, the goal is to transition from a hatchery-based recovery effort to one that relies increasingly on production in the wild, avoid extinction, and support sport and tribal harvest needs.