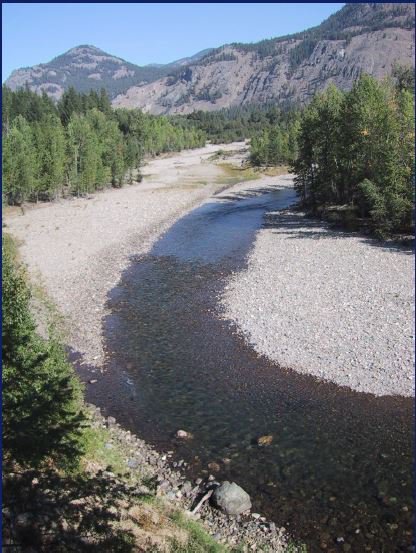 Where will salmon go if summer river temperatures rise to spa levels again, as they did in 2015?

Last year’s warm water in the Columbia was a disaster for summer-migrating salmon, notably sockeye. A quarter million of them died trying to migrate through the Columbia River Gorge on their way to spawn in the mountains of central Washington and Idaho, and southern British Columbia.

Since then, the United States Geological Survey has been on the hunt for cool places in the mainstem Columbia and Snake rivers and tributaries that could be enhanced, connected, or otherwise opened up to migrating fish when they need a break from lethally warm rivers, should a temperature emergency happen again.

“We want to identify and understand the sites that offer protections for fish," said Greg Fuhrer, USGS acting regional deputy director, at a Council meeting this week in Boise. “We want to be sure fish can get to those places.”

The summer of 2015 was a beast for cold-water fish, a calamity of converging insults including drought, heat, low snowpack, low runoff, and low flows. 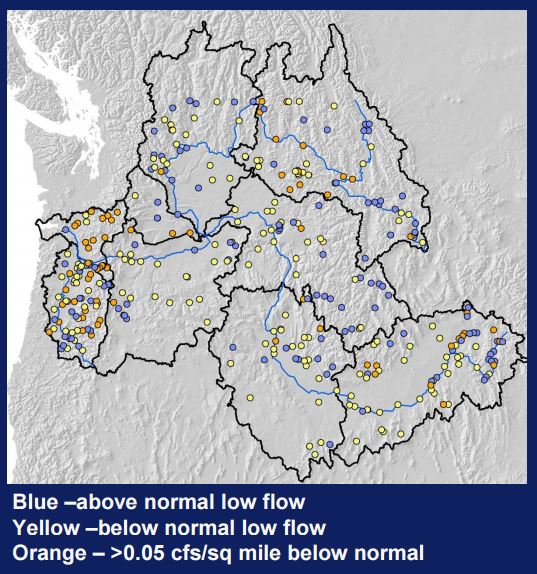 River and stream flows last summer: Blue is good, yellow and orange are not. USGS map.

"Last year we were getting questions from states about where there would be streamflow problems, and we didn’t have specific answers," said Chris Konrad, a USGS research hydrologist.

The agency was able to use its extensive system of river gauges to assess the vulnerability of streams to the drought, he said. In addition, the agency is investigating streamflow response to the summer drought and heat in six western states to document the extent and severity of the drought and identify streams that resist drought. Drought-resistant streams have constant flows across years and can provide cold-water refugia for fish. These are the streams that should be prioritized for habitat protection and connection to each other.

Last summer the agency recorded flow information at 434 gauges across the Columbia River Basin in all of the major subbasins and watersheds. In addition to gauged sites, USGS measured low flows at 340 other sites in the Columbia River Basin. The Willamette River Basin, the Lower Columbia area, the Spokane River Basin, and the Upper Snake region had many rivers and streams with below-normal low flows. Low-elevation rivers and streams west of the Cascade Mountains had the most extreme low flows, the USGS reported.

The message from 2015 is that if the vulnerability of streams to low flows can be linked to specific factors, water managers will be able to do a better job forecasting where water availability is likely to be an issue in a particular year. The next steps for this research are to refine the assessment of potential cold-water refugia and, possibly in the future, expand the stream-vulnerability assessment, produce a map of drought-vulnerable streams, and assess groundwater recharge from snowmelt in rivers.