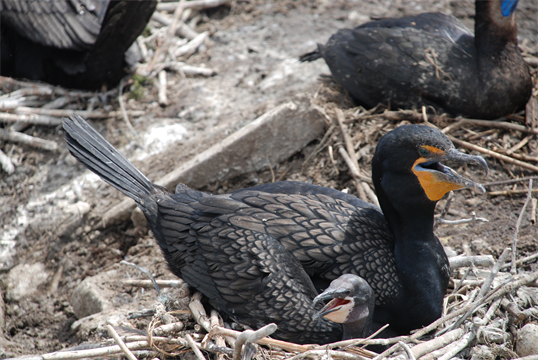 Shooting double-crested cormorants and suffocating their eggs with corn oil to reduce their predation on juvenile Snake River steelhead may have no impact on the number of adult steelhead returning from the ocean to spawn, a US. Fish and Wildlife scientist has concluded in a preliminary analysis.

Snake River steelhead are the species believed to be most affected by the fish-eating birds whose numbers have increased by remained stable since 2004. In fact, culling double-crested cormorants probably won’t improve the survival of other fish species, either, according to a preliminary analysis by Steven Haeseker, a fish biologist and biometrician with the agency’s Columbia River Fisheries office in Vancouver. He presented his results at a recent meeting of the Council’s Independent Scientific Advisory Board. The matter is controversial, as  three scientists from NOAA who reviewed the draft paper wrote that shortcomings in the methodology were likely to “invalidate the conclusions.”

For the second year in a row, the U.S. Army Corps of Engineers is shooting cormorants and dousing their eggs on a tiny island built from dredged material near the mouth of the Columbia River. The intent is to reduce predation on salmon and steelhead smolts migrating through the estuary on their way to the ocean. Reducing predation by double-crested cormorants is among the actions in a 2014 federal plan to protect ESA-listed salmon and steelhead (recently rejected by a federal judge). The plan calls for reducing  the double-crested cormorant population in the estuary from about 13,000 nesting pairs to 5,300-5,900. This year the killing began April 7, authorized by a “depredation permit” issued to the Corps by the U.S. Fish and Wildlife Service on March 18. The birds hunt for fish in the area of East Sand Island, where they also build nests. The island is just south of the town of Chinook, Washington. The permit also allows the Corps to kill birds and oil nests on any other dredge-remain islands in the lower river. The limits in the permit are 3,114 double-crested cormorants and 5,000 nests in 2016. Last year more than 1,700 birds were killed and more than 5,000 nests were oiled.

He summarized his preliminary results, in part: “Cormorant consumption rates were not a significant factor for steelhead [smolt-adult-return rates] after accounting for the other freshwater and ocean factors.”

It's important to note that the Fish and Wildlife Service considers Haeseker's research preliminary and that it is currently being updated with additional data. The Service noted that while the analysis focused on Snake River steelhead, cormorant predation extends to a variety of juvenile Pacific salmon in the lower Columbia, primarily sub-yearling fall Chinook.  As such, the study methods are being examined to see if they can be applied to other salmon stocks subject to cormorant predation. In addition, the study needs to be peer-reviewed, according to the Service. These actions are underway, but are not yet complete.  Once the study is complete, a new draft will be submitted to a peer-reviewed journal.

The paper has stirred some controversy in the scientific community. Three scientists for NOAA Fisheries, the federal agency that implements the Endangered Species Act for salmon and steelhead, reviewed the draft paper in February and commented:

"The framework used to estimate the parameters of interest is not new, dating back 30+ years, having originally been applied to wildlife management. Although the general framework itself is indeed well grounded, there are several issues with the specific application of the framework by Haeseker that likely invalidate the conclusions." Specifically, the scientists wrote: "It is well known that not accounting for all sources of variance appropriately can induce strong biases into statistics of interest. In this case, the statistic of interest is the correlation between the mortality due to cormorants and that due to all other factors. Due to the nature of the sampling and its associated error, however, the true process correlation between the two sources of mortality is biased ... and therefore it is inappropriate to simply estimate the correlation between them. Instead, one can use random effects to parse the variation accordingly and estimate the true correlation."

In April 2015, the Audubon Society of Portland and four other groups sought an injunction in federal court to prevent the killing, but a federal judge denied the request. The lawsuit continued this year but had not been decided by the time the killing began.