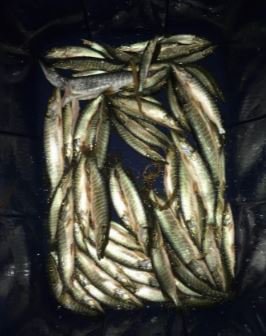 The invasion of northern pike in Lake Roosevelt, the reservoir behind Grand Coulee Dam, appears to be gaining strength, as researchers have documented an increase in the number of juvenile fish and now can identify three distinct age classes, from two to four years old.

The Spokane and Colville tribes, and the Washington Department of Fish and Wildlife, are collaborating on a research project to find, document, and eradicate northern pike. The species breeds prolifically, can grow to more than 40 pounds, and can be voracious predators of virtually every other type of fish present in the same waters. 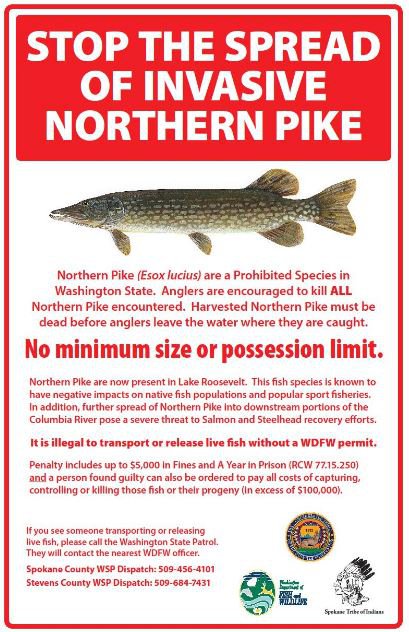 43 of these signs are posted around Lake Roosevelt

This week the Northwest Power and Conservation Council approved $40,000 from cost savings in other projects in the Council’s Columbia River Basin Fish and Wildlife Program to help fund the eradication effort in the coming fiscal year, which begins October 1.

Northern pike were first discovered in Lake Roosevelt in 2015, entirely in the northern part of the reservoir near Kettle Falls. The fish may have been introduced illegally by anglers who like to catch them, or they may have found their way downstream from infested waters upstream.

Regardless, they need to be controlled before they spread downstream of Grand Coulee and Chief Joseph dams, where they could damage salmon and steelhead populations.

“The purpose of the work we’re doing now is to help develop a long-term plan for eradication,” Brent Nichols, fisheries manager of the Spokane Tribe, told the Council at a meeting in Spokane. There is a sense of urgency.

Nichols said the number of juvenile fish is increasing, and researchers have identified an area of the reservoir near the community of Evans, north of Kettle Falls, where conditions exist that pike favor for spawning – deep water, slow current, and an abundance of aquatic vegetation. Electrofishing in that area – using electric current to stun fish so that they can be collected and removed – has been successful and will continue.

“You clean them out one day, and more are back the next,” he said. “But we have a targeted area where we are being very successful eradicating pike.”

That’s the hopeful news for now. Favored spawning areas are being identified, and fish are being removed.

Tony Grover, the Council’s fish and wildlife director, told the Council: “You are hearing this report today because it’s not good news. What Dr. Nichols is suggesting is that down the road we may need to step up the aggressiveness of this eradication effort in a big way because if they get down into the salmon and steelhead area, that’s a very big problem.”