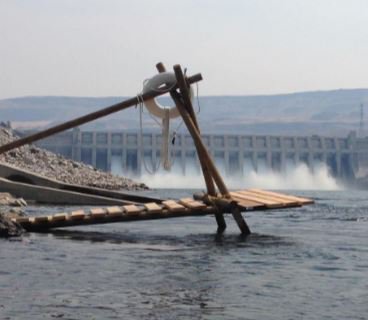 The careful, multi-agency analysis of whether, when, where and how to reintroduce ocean-going salmon and steelhead to the Columbia River above Grand Coulee and Chief Joseph dams is on schedule and on budget, representatives of the Upper Columbia United Tribes told the Northwest Power and Conservation Council at a recent meeting in Spokane.

In the 2014 revision of its Columbia River Basin Fish and Wildlife Program, the Northwest Power and Conservation Council adopted a strategy for mitigating the impacts of dams like Chief Joseph and Grand Coulee that block salmon and steelhead from their historic habitats. The strategy allows for mitigation actions “…that may include [dam] passage investigation, reintroduction of anadromous fish, habitat improvements, and harvest opportunities for the loss of salmon and in blocked areas of the Columbia Basin that historically had runs of anadromous fish,” according to the program.

There are many challenges to reintroducing anadromous fish into the Columbia above Chief Joseph and Grand Coulee dams, should reintroduction ultimately be considered feasible. A few of these include how to move juvenile and adult fish around the two dams, finding appropriate habitat, where and how to raise juvenile fish, the species that would be introduced, significant predation issues by existing fish species in Lake Roosevelt, and capturing adult and juvenile fish for transportation, if that is considered preferable. For now, as called for in the Council’s program, the first step is an assessment of potential habitat.

The Spokane Tribe of Indians will conduct the assessment, which is expected to last into next year. The habitat assessment is focusing on tributaries that flow into Lake Roosevelt, the reservoir behind Grand Coulee Dam. The assessment has $150,000 in place, two-thirds of it from the Bonneville Power Administration and the remainder from the Bureau of Reclamation. The Council approved Bonneville’s share of the funding last April.

“I hope this assessment will tell us which way to go and which bodies of water will have the best chance of success for the future,” BJ Kieffer, Director of Natural Resources for the Spokane Tribe, said.

Kieffer said the Spokane River and its tributaries have the potential for up to 5,000 miles of habitat. The assessment will narrow and define that potential more precisely, he said.

The habitat assessment will use multiple computer models to determine the potential for habitat to support ocean-going fish including life-stage trajectories to estimate the number of juvenile or adult fish that could be supported in each tributary river reach during each life stage. The assessment is a collaborative effort funded by the Bonneville Power Administration through the Council’s fish and wildlife program, the Bureau of Reclamation, which operates Grand Coulee, and tribal funding.

Collaborating with the UCUT are other tribes in the United States, First Nations in British Columbia, where the Columbia River begins, federal agencies that operate dams and manage habitat, and state fish and wildlife agencies.

Meanwhile, the Council is preparing a paper on fish passage at high-head dams like Grand Coulee. The purpose of the white paper is to identify and evaluate the current methods and emerging technologies of various fish passage systems used either at high-head dams or those that could be applied to dams of any size and capacity.