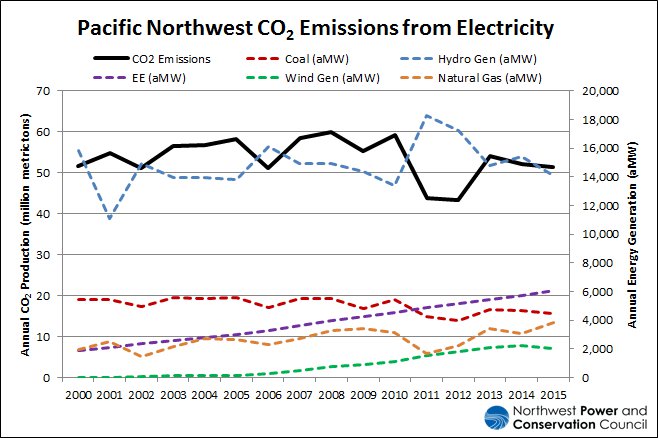 How can we interpret these trends in emissions? It’s all about changes in the resource mix

The Pacific Northwest is fortunate to have an abundant hydropower system, providing on average over 50 percent of the region’s annual energy. Energy efficiency is our second largest resource. We’ve saved 6,000 average megawatts since 1978, keeping load growth down and providing an alternative to developing new resources. Coal and natural gas are next, followed by wind, nuclear, biomass, geothermal, and solar.

In comparison, thermal resources dominate the United States’ resource mix. Coal and natural gas accounted for 66 percent of the nation’s energy in 2015, followed by nuclear, hydro, renewables, and petroleum. The difference in the resource mix between the region and the United States is an important distinction. While hydropower drives the dispatch of other resources here, it plays a much smaller role nationwide. For example, in good hydro years, when runoff is above average, we dispatch thermal resources less often and emissions are lower. In poor hydro years, the system relies more on thermal resources and emissions increase. 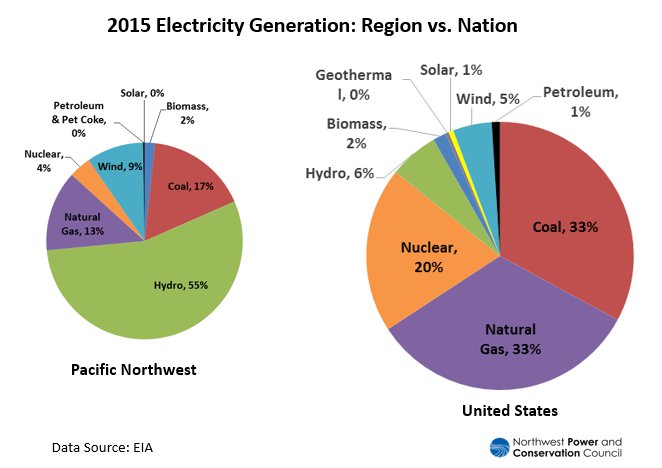 With low natural gas prices over the past several years (outside of occasional weather-related price spikes, the price for natural gas is likely to remain relatively low for the foreseeable future), development of new natural gas resources has been on the rise. In addition, existing natural gas plants have seen increased dispatch in order to take advantage of the low price of fuel. The increased use of natural gas, and subsequent decrease of coal, has changed the thermal dispatch. With natural gas emitting, on average, about 45 percent less carbon dioxide than coal, overall emissions at the national level have begun to decrease. While we’ve seen this trend in the Pacific Northwest as well, it has less of an effect on the region’s emissions due to the dominance of the hydropower system.

With close to 3,000 megawatts of coal capacity set to retire over the next decade in the region, emissions will likely decrease significantly. However, these resources must be replaced. Efficient and advanced natural gas plants and renewables such as wind and solar are likely replacement resources. Increasing dispatch of existing natural gas plants, along with the region’s continued success in meeting our efficiency goals, will help keep both load growth and emissions down.

The combustion of fossil fuels to generate electricity, and the resulting release of emissions, has garnered attention from lawmakers, environmental groups, utilities, manufacturers and generators. Efforts to curb emissions at the local, national, and international levels as well as the availability of low-cost natural gas will help determine the future of emissions in the long term.