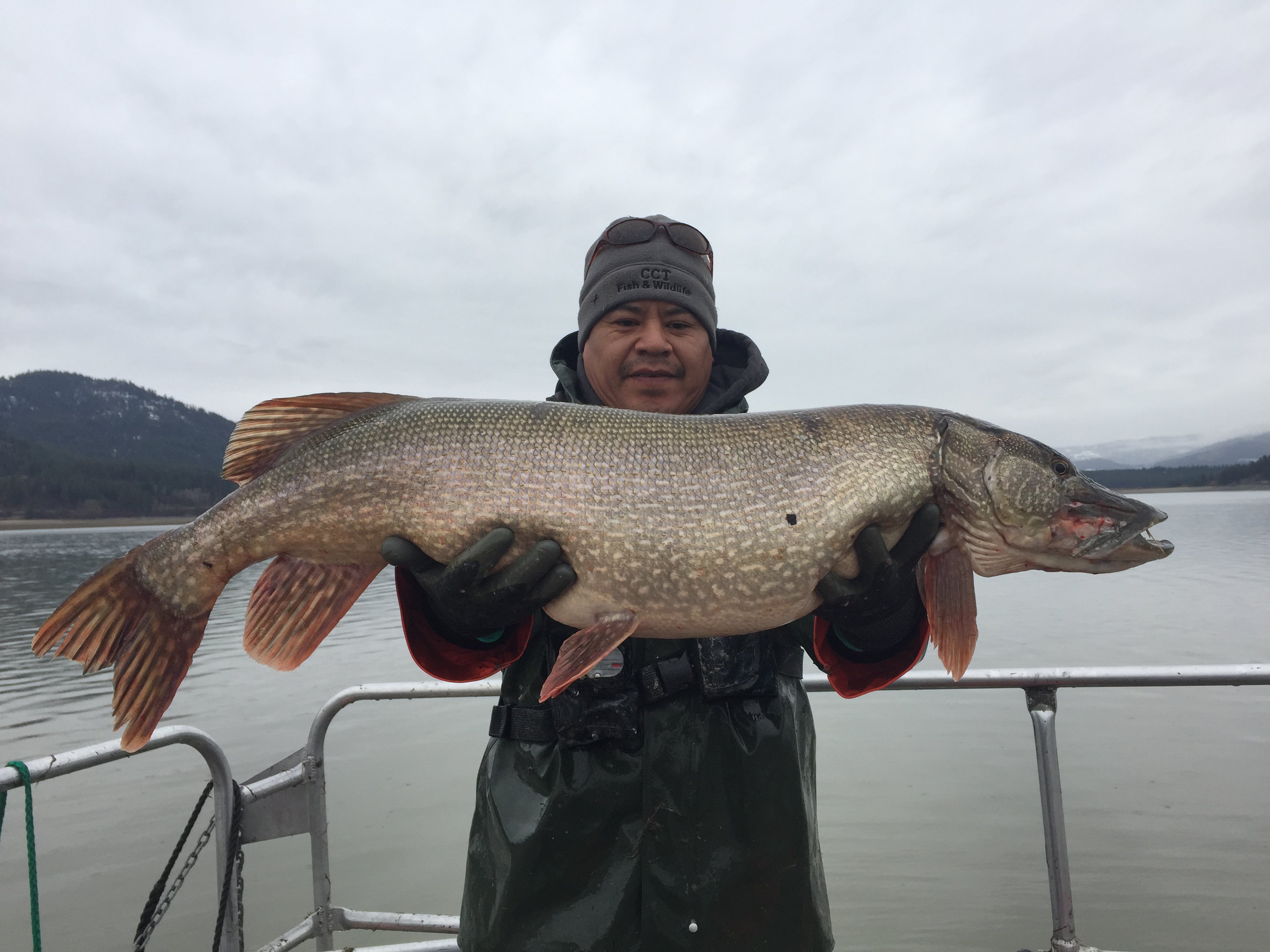 The Confederated Colville Tribes have placed a $10 bounty on the heads of the nightmare fish of Lake Roosevelt, Northern Pike.

It’s simple: Catch a pike, cut off the head, take it – or as many as you can catch – to one of two collection stations -- at the Tribal Trails Noisy Waters deli and gas station at the intersection of highways 20 and 395 at Kettle Falls, or at the National Park Service’s Kettle Falls fish-cleaning station. Put the head(s) in one of the supplied ziplock bags, fill out the label, drop it in the freezer, and the tribes will send you $10 per head. 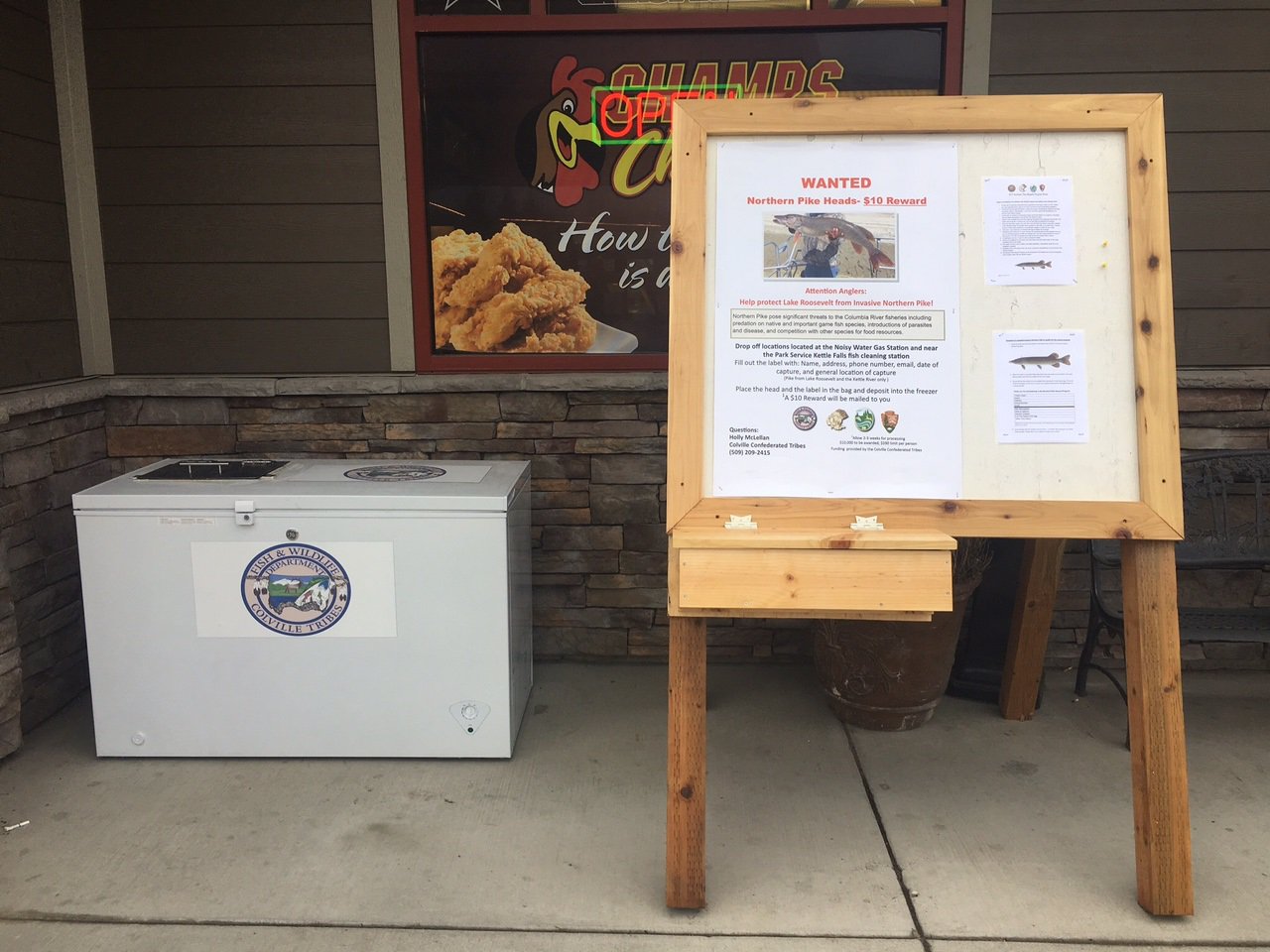 The drop-off site at the Noisy Waters deli and gas station.

The purpose of the reward fishery is to help reduce the population of Northern Pike, a dangerous predator, in the lake. Pike eat crayfish. They eat suckers. They eat bass, trout, Walleye, Perch, Lake whitefish, juvenile White Sturgeon, mice, and baby ducks. They even eat their own young.

"The reward program involves anglers as co-managers to protect the Lake Roosevelt ecosystem," McLellan said. "We need their help to stop the spread of Northern Pike. We hope the reward program will incentivize anglers to kill the pike they catch instead of releasing them back into the lake."

Unless their steady invasion of Lake Roosevelt, which is the Columbia River impounded behind Grand Coulee Dam, is halted they could spread downriver. If they became established below Grand Coulee and Chief Joseph dams, they would pose an enormous threat to efforts to recover ESA-listed salmon and steelhead. 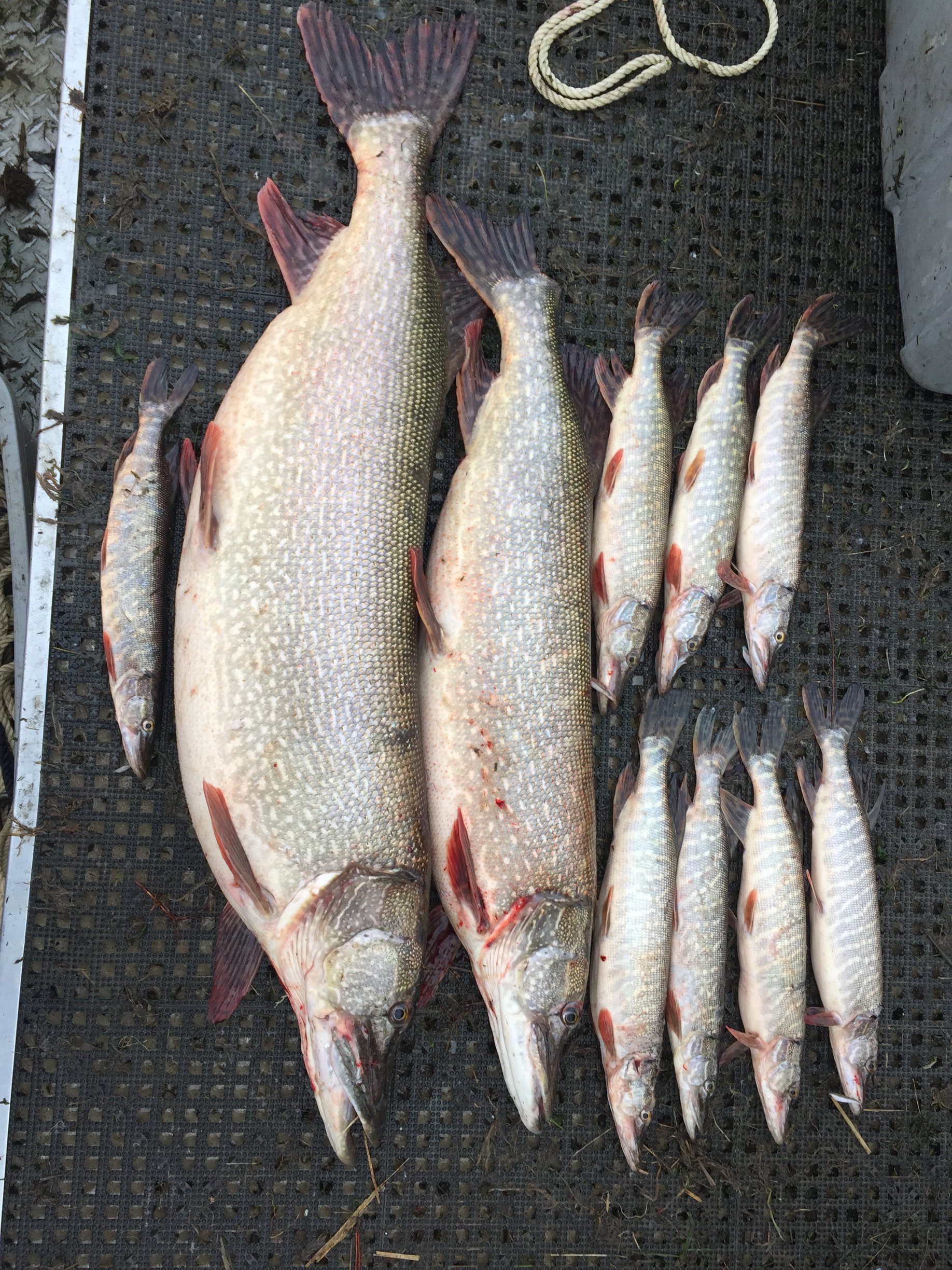 Multiple age classes of pike caught this year in Lake Roosevelt, evidence that the population is growing.

To improve understanding of the population in Lake Roosevelt, every other week this year since February, biologists with the Washington Department of Fish and Wildlife (WDFW), the Colville Confederated Tribes, and the Spokane Tribe have been netting pike in the shoreline shallows around the Colville and Kettle rivers, where the fish school in preparation for spawning in May and early June. It’s part of an effort that began this year, even though the first pike was discovered in the lake in 2009.

Most likely the fish now taking hold in Lake Roosevelt migrated down the Pend Oreille River, which enters the Columbia just north of the international border. The Kalispel Tribe and WDFW have been aggressively removing pike in the Pend Oreille River since 2007 and have been successful in Box Canyon Reservoir. They are now focusing their efforts in Boundary Reservoir, all in an effort to stop the downstream spread of this invasive species.

In March, Washington Power Council member Guy Norman visited Lake Roosevelt and spoke with Colville and Spokane tribe biologists as they netted pike. “I was amazed by the number of adult pike they were catching with so little effort,” Norman said. “It certainly rang the alarm bells for me. This is something that could have significant ecological effects on the lake, and on fisheries both in the lake and downriver. We need to get on top of it.”

The Council is concerned about the expansion of invasive pike, and in February 2016 recommended support for efforts by the Spokane Tribe to reduce proliferation in Lake Roosevelt, based on a proposal supported by public comments and independent scientific review. The Colville Confederated Tribes have also been funding suppression efforts through their Columbia River Fish Accord with the Bonneville Power Administration and with internal tribal funds.

There is no doubt the pike numbers are higher this spring than during the same period in 2016, McLellan said. Through April 5, 702 were caught ranging in size from 12 to 42 inches and averaging 17 inches and 2 pounds per fish. That’s more than 10 times as many as were caught during the same period in 2016. The research fishing will continue periodically through early June when spawning will be over and the fish will move into deeper water. Next fall, researchers will electro-fish and gillnet the shorelines, as they have in recent years, to assess and remove the population of juvenile pike.

Voracious predation by pike on smaller fish imperils ongoing efforts to raise and release trout, Kokanee, and other game fish into the lake to replace and rebuild species including salmon and steelhead that were wiped out by the construction of Grand Coulee and Chief Joseph dams. While pike are popular with recreational fishers -- there is no catch limit in Idaho or Washington – many anglers toss them back after hooking them.

Meanwhile, the Colville Tribe and WDFW have established monitoring stations downriver in Lake Roosevelt, in Lake Rufus Woods behind Chief Joseph Dam, in the Okanagan River, and in Banks Lake, the reservoir above Grand Coulee that supplies irrigation water to the 600,000-acre Columbia Basin Project. Water samples will be tested for pike DNA that would serve as an early warning that the predators, even a small number of them, are present so that eradication efforts could begin quickly.

“The population will keep expanding if we are not aggressive enough with the removal,” McLellan said.