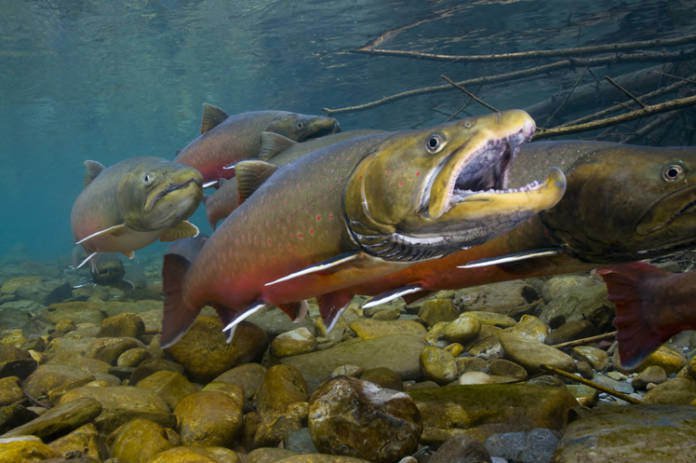 At the Council’s April meeting, research fisheries biologists Michael Young and Dan Isaak from the USDA Forest Service shared first-year results from an environmental DNA inventory of bull trout, the target of the most extensive effort to date to map an aquatic species throughout its entire geographic range in the United States. Bull trout is one of the important resident fish species in the Council’s Columbia River Basin Fish and Wildlife Program.

Fish and other organisms shed their DNA into the water, environmental DNA, which can be used to track them. Scientists at the Forest Service’s National Genomics Center for Wildlife and Fish Conservation pioneered this method of detecting aquatic species, which is less expensive, faster, and more accurate than conventional methods such as counting through netting and electro-fishing.

One person, with each sample taking less than 15 minutes to collect, can do environmental DNA sampling. And, because even a single DNA molecule on a filter can be detected with high reliability, it’s remarkably accurate. Even with a single species residing in a 100-meter stretch of river, eDNA sampling has an 85 percent chance of detection. If there are two species present, the chance of detection increases to 100 percent.

Biologists from dozens of agencies and Native American tribes contributed time and matching funds to collect approximately 3,000 samples to date, a total expected to exceed 10,000 at the project’s conclusion in 2018. The results will be invaluable to researchers trying to understand patterns of habitat occupancy by bull trout. Bull trout is an ideal candidate for eDNA sampling as it is geographically widespread, yet rare; has been difficult to detect historically; and it's a threatened species listed under the Endangered Species Act.

Already, the results of the bull trout project are useful, showing the fish in some unexpected areas. And, surprisingly, not in some areas where they were thought to exist.

While the detection and mapping of bull trout is the first, extensive use of eDNA sampling, it will not be the last. The goal of the National Genomics Center is to map more than 30 species of fish, ducks, and mammals, and make that information available to everyone in an eDNA atlas. Bull Trout are the flagship species for this effort and those data are available now, but many more will be included in this valuable project.