It was a beautiful spring day as the sun rose over distant peaks and people gathered to watch members of the Confederated Tribes of the Colville Reservation use dip nets, a traditional fishing technique, to harvest the first salmon of the season. On this day, May 19, the Colville Tribes hosted their annual First Salmon Ceremony at the Chief Joseph Hatchery in Bridgeport, Washington, where the ceremony has been held since 2013.

In attendance were tribal members and elders from the Colville Tribes, Coeur d’Alene Tribe, and the Okanagan Nation Alliance; representatives from the Upper Columbia United Tribes, the U.S. Army Corps of Engineers, and Council member Guy Norman and Council staff; and school children from the Inchelium Elementary School. Randy Friedlander, Fish and Wildlife Director for the Colville Tribes, hosted the ceremony. Leroy “Chaz” Williams led a prayer and song, the first Chinook was captured, and there was time devoted to honoring elders who attended the ceremony and listening to their stories about the importance of salmon to the tribes.

There was a series of presentations about hatchery production of salmon, suitability studies regarding reintroducing of salmon into habitat above Grand Coulee, and adult salmon returns, and a tour of the hatchery completed the ceremony, which had been originally planned for the previous week. The ceremony was rescheduled because spring Chinook have taken longer than usual this year to arrive in the upper Columbia River. At the time of the ceremony, only 18 Chinook had passed Wells Dam, and five of those had been seen in the ladder at the hatchery the day before the ceremony. It took some time, but eventually a Chinook was caught. Members of the Colville Tribe fished with a dip net from a platform above the fish ladder. Colville staff members smoked the first-caught Chinook for the luncheon, which was fileted and prepared by Friedlander. 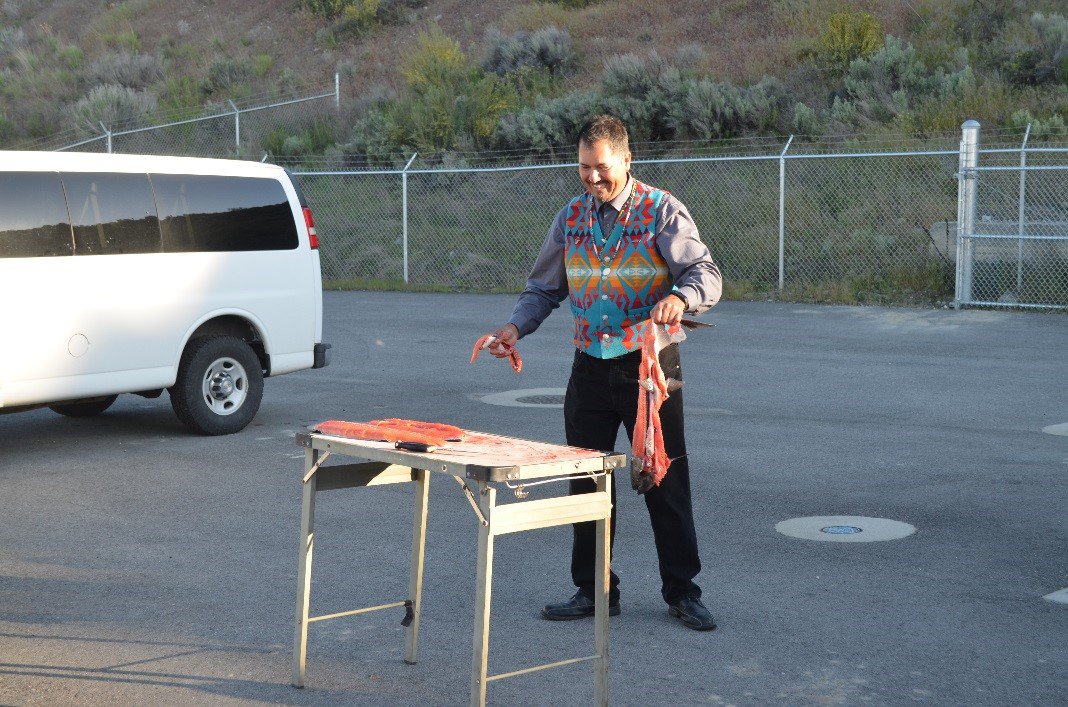 Once the first Chinook was caught, Randy Friedlander (CCT Fish and Wildlife Director) did the honors of fileting the fish and preparing it to be smoked

The Chief Joseph Hatchery, funded through the Colville Tribes’ Columbia River Fish Accord with the Bonneville Power Administration, was completed in February 2013 and operates to increase spring, summer, and fall Chinook salmon in the Okanogan and Columbia Rivers. The goal of the hatchery is to produce 2.9 million juvenile fish each year.

The fish caught for this year’s First Salmon Ceremony was a hatchery fish from the 2013 release. The Colville Tribe has estimates that 1 percent of each year’s hatchery releases of juvenile salmon will return to support both tribal and recreational harvest. 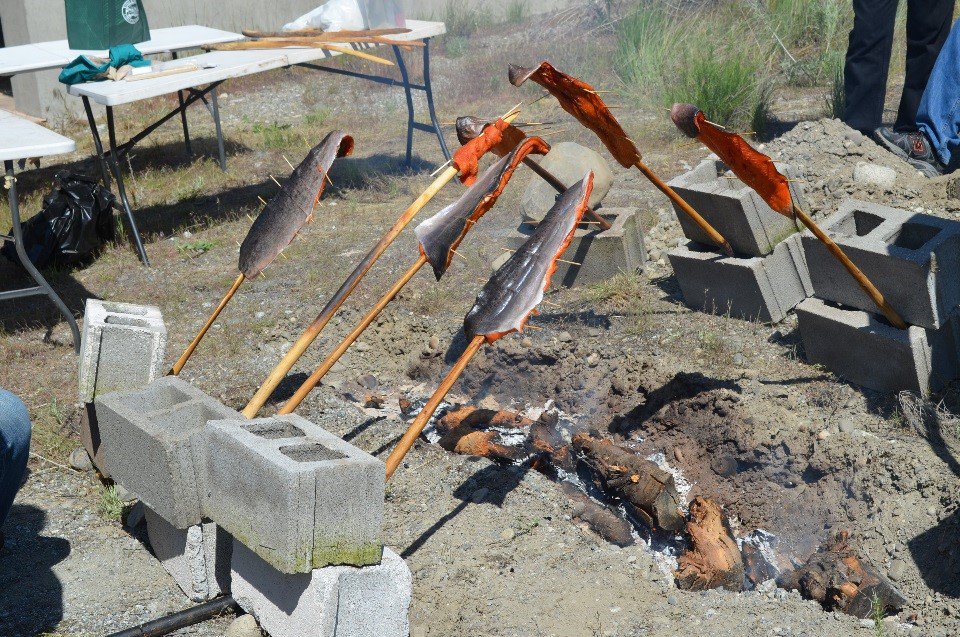 The Confederated Tribes of the Colville Reservation include twelve bands: Wenatchi, Entiat, Chelan, Methow, Colville, Okanogan, Nespelem, Sanpoil, Lakes, Moses-Columbia, Palus, and the Chief Joseph Band of the Nez Perce. Their reservation totals 2,100 square miles (1.4-million acres) and is bordered by the Columbia River on the east and a large portion of the south border. The Colville Tribes co-manage Lake Roosevelt, the reservoir behind Grand Coulee Dam, with the Spokane Tribe and the Washington Department of Fish and Wildlife (WDFW). The Colvilles also co-manage Lake Rufus Woods, the reservoir between Chief Joseph and Grand Coulee dams, with WDFW.

On the Colville Tribes’ Fish & Wildlife Department website you can find information for the Tribes’ programs and their quarterly newsletter.