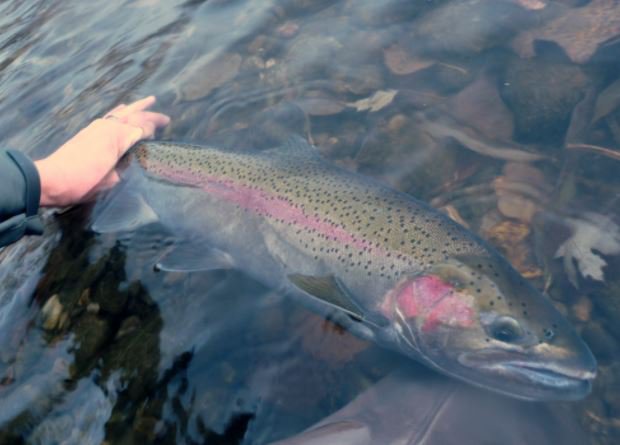 Where are all the steelhead? And the sockeye, too.

So far this year, the steelhead count at Bonneville Dam totals just over 39,000 fish (through August 16). While the run is not considered complete, the disappointing number so far is just 12 percent of the recent 10-year average of 330,000 fish and far below the 2017 forecast of 131,000. In fact, it’s one of the lowest steelhead counts in the last 50 years. The sockeye run is about one-third of the 10-year average.

While it’s impossible to blame the poor return on any specific factor, the phenomenon known as “Blob,” a vast area of unusually warm water in the north Pacific Ocean that persisted for several years until 2015, may be the chief culprit, Dan Rawding of the Washington Department of Fish and Wildlife told the Northwest Power and Conservation Council at a meeting this month.

“I’m not saying the ocean is solely to blame, but we know temperature caused a dramatic shift in the North Pacific ecosystem,” Rawding said. “We think a lot of our poor returns in 2017 are due to the impact of the Blob in 2015.” That’s when the adult steelhead returning this year went to the ocean as smolts, and one effect of warm water in the ocean is to reduce the supply and nutritional value of food organisms. Many fish are believed to have simply starved.

Hot weather and corresponding warm rivers earlier this month prompted Northwest state fish and wildlife agencies to protect fish by reducing harvest. Idaho, for example, closed fall harvest of steelhead after just 400 crossed Lower Granite Dam about 30 miles downstream from Lewiston. The 10-year average for that date at the dam is about 6,000. Washington and Oregon implemented rolling closures of steelhead fisheries to protect the species.

While Columbia River temperatures measured at Bonneville Dam were near the top of past observed temperatures, occasionally reaching as high as 75 degrees Fahrenheit, they were not records. Prolonged exposure to water temperatures over 68 degrees is stressful for cold-water fish like salmon and steelhead.

In a presentation to the Council this month, fishery managers from Idaho, Oregon, Montana, and Washington discussed Columbia River fish counts and the impacts of high air and water temperatures on fish early in the month.

Columbia River spring and summer Chinook runs were about equal to the recent 10-year average but the sockeye return, like steelhead, was far below predictions. Spring Chinook totaled about 110,000 at Bonneville, less than but close to the predicted 160,000, and the number of summer Chinook – 66,000 counted at Bonneville so far – was nearly equal to the 10-year average, 68,000, and above the forecast of 63,000 fish.

The sockeye run, though, is a different story. The sockeye count of 87,628 fish (through August 16) is far below the 10-year average of 316,000 and less than half of the 199,000-fish forecast. Most sockeye in the Columbia return to tributaries of the upper basin in Washington and British Columbia. The Snake River component, an endangered species, numbered just 401 fish at Bonneville through August 10, compared to 1,032 by the same time last year and the recent high of 4,093 fish in 2015. The actual return is expected to be about half of what was predicted, Paul Kline of the Idaho Department of Fish and Game said. As of August 14, 226 sockeye had been counted at Lower Granite Dam, and 25 had been trapped in the Stanley Basin where the fish either spawn naturally or return to a hatchery.

While the heat in early August set records, the summer overall has not been too stressful for fish. Fish mortalities in the Columbia have averaged three sturgeon and three salmon per week between Astoria and Lower Granite Dam, the same as in 2016. “We’re not having the tremendous die-off of salmon and sturgeon that we saw in 2015,” Rawding said.