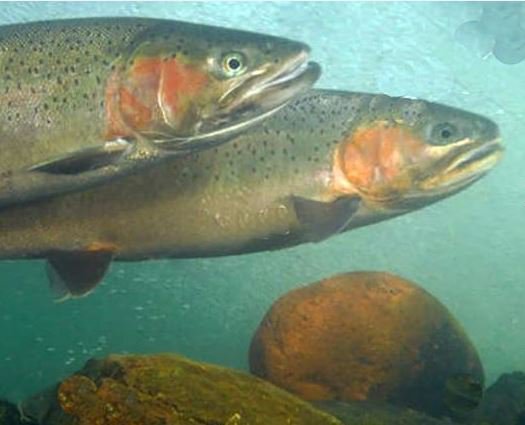 Predation on fish at Willamette Falls, about 13 miles south of Portland, has increased to the point that today there is an 89-percent probability that Willamette Winter Steelhead, ESA-listed as a threatened species in 1999, will go extinct if the annual fish kill continues at the rate observed in 2017, an Oregon Department of Fish and Wildlife biologist told the Northwest Power and Conservation Council this month. He blames the success of a federal law that protects sea lions.

Sea lion predation on Willamette Winter Steelhead, already in low abundance due to a variety of factors, is estimated at 20-25 percent of the run this year in the area of the fish ladder at Willamette Falls, research scientist Shaun Clements said. Willamette Spring Chinook Salmon, also an ESA-listed threatened species, are affected as well, as are White Sturgeon.

“The reason this is occurring is primarily because of the huge success of the Marine Mammal Protection Act,” Clements said. From a population estimated at 30,000 in 1980, the number has grown to 300,000 today, according to a 2015 report by NOAA Fisheries. As the West Coast population of California sea lions boomed, so did their numbers in the Columbia and Willamette rivers, leading to increased predation on fish.

“We’re finding the Californias moving into areas where they were not previously, including the Willamette, where they tend to congregate at the base of the falls,” Clements said. Predation as a percentage of the run was higher this year than in recent years because the Willamette runs were smaller than usual, he said. The winter steelhead run was only 512 fish, the lowest ever recorded.

“There are very limited options for what to do; non-lethal hazing just doesn’t work,” Clements said. Nonetheless, the Oregon and Washington fish and wildlife departments will continue to monitor predation at Willamette Falls and also at Bonneville Dam on the Columbia, branding and trapping the most aggressive predators for removal from the rivers.

Steve Jeffries, a research scientist for the Washington Department of Fish and Wildlife, said the only effective non-lethal deterrent to predation by sea lions is the steel bars installed in front of fishways to keep the animals out. He said a 1999 report to Congress by NOAA Fisheries identified the same problems that continue today – aggressive predation by seals and sea lions and few options to control the problem.

“We identified non-lethal deterrents, but we haven’t gotten very far with those,” he said. “We’re still in the same place where we have predation on species that are threatened and endangered. Noise in the water column, hazing with boats and cracker shells, those don’t work. Moving the animals doesn’t work; most if not all of them return,” Jeffries said. “We really have not been able to reduce predation.”

Meanwhile, bills have been introduced in both the United States House and Senate to provide the state agencies and Indian tribes more effective emergency options for protecting fish and fisheries from the small number of aggressive, individually identifiable sea lions, legislation the Council supports.

“Only a small percentage become salmon killers,” Jeffries said. “We know the numbers of sea lions will just keep growing if you don’t get them out of the areas where they shouldn’t be.”

The Council follows predation research and management as part of its reporting on high-level indicators, which track the progress of the Council's fish and wildlife program to mitigate the impacts of hydropower on fish and wildlife in the Columbia River Basin.