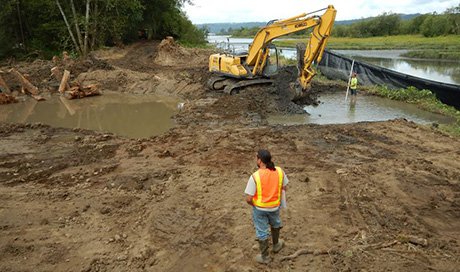 About half of the habitat available to fish and wildlife in the lower Columbia River has been lost to development, but a good portion of that is considered recoverable, the Lower Columbia Estuary Partnership (LCEP) reported this month at a meeting of Columbia River and ocean researchers. Restoring habitat could help improve survival of juvenile salmon migrating to the ocean by providing more places to rest and feed.

Habitat restoration is one part of a larger effort by LCEP, NOAA Fisheries, Washington and Oregon fish and wildlife agencies, and others to better understand the survival of juvenile salmon in more than 100 miles of the lower Columbia River, including where and what they eat and whether the density of fish in the river may affect food availability and, ultimately, whether the fish survive.

Historically – meaning in about the 1870s – available habitat along the river between Portland and ocean totaled 224,081 acres; that amount has dwindled by about half as the result of development, agriculture, and the construction of flood-control gates and dikes. But about 77,210 acres are considered recoverable, Catherine Corbett of LCEP said. LCEP’s goal, working with numerous conservation groups and state and federal agencies, is to restore 22,000 acres, adding to the 23,195 acres recovered and protected since 2000, Corbett said. That work has involved more than 200 projects, some of them completed and some currently in planning, design, or implementation.

Part of the effort to restore resting and feeding habitat in the estuary is to find out where the fish go and how much they eat and where. The results so far are informative, but questions remain.

“We are not finding that juvenile salmon in the lower Columbia are food-limited,” Corbett said. “Stomach contents consistently show active feeding. We are trying to determine whether some sites are better for fish than others.”

So far, it appears the area around Campbell Slough north of Portland at the Ridgefield National Wildlife Refuge is the best site for fish of five sites that have been examined, she said. But that doesn’t mean it’s always the best site, as the river, fish, and prey are constantly in motion. Places that appear to have a good prey base for fish one day, or hour, or even minute might not the next.

Meanwhile, NOAA Fisheries researchers, have examined the stomach contents of more than 1,000 juvenile salmon to better understand how the number of fish in the river, how much they eat, and where, affect growth and survival.

“The Columbia is an incredibly dynamic environment,” NOAA salmon researcher Laurie Weitcamp said. “Hatchery fish had less food in their stomachs and were often found in higher densities, but I wouldn’t want to attribute low stomach contents to fish density if it was mainly due to year-to-year differences in fish productivity, for example.”

Ultimately, the researchers hope to better understand the effects of fish density in the estuary on competition for food, on fish survival and, as a result, the success of fish in the ocean as they grow and mature to spawning-age adults.