Once a year, staff presents an update to the Council on the latest carbon emissions data to give Council members the most up-to-date information on regional and national greenhouse gas emission levels and the trends behind those emissions. Data is available at the regional level, the Western Electricity Coordinating Council (WECC) level, and at the national level. 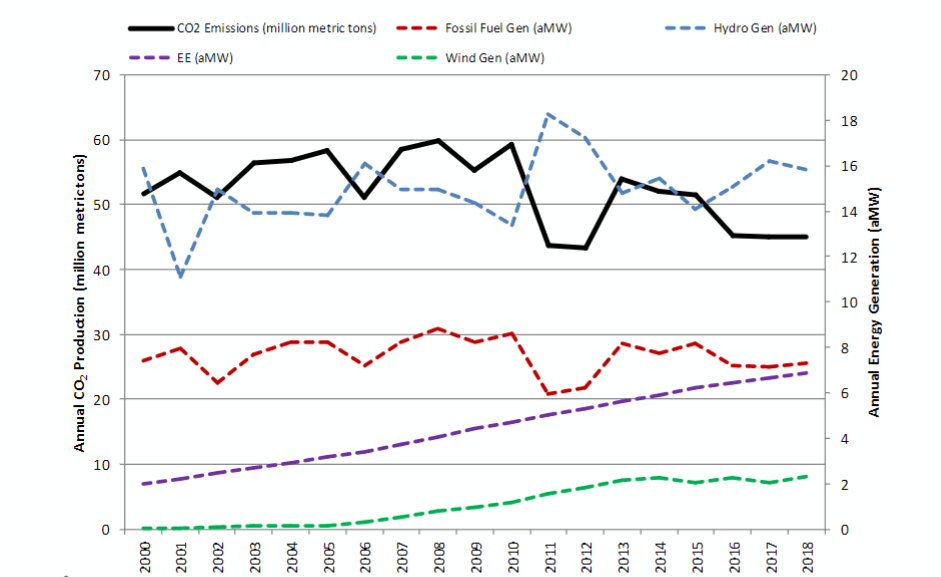 Annual carbon emissions from electricity generation in the Northwest have remained mostly flat over the last three years. With three average hydro years in a row, the region has been able to rely on steady, low-carbon energy from hydro, supplemented with primarily natural gas, as well as some coal, wind, and energy efficiency.

On average, since the early 2000s, the region has seen average coal generation decline while natural gas generation has increased. Coal retirements over the next few years have the potential to dramatically decrease future regional carbon emissions. Announced and planned retiring coal plants account for 50 percent of historical emissions since 2000.  However, actual emission reduction will depend on what resources replace those retiring plants.

At the broader Western region level, coal units are decreasing over time, too. Various renewable portfolio standards, clean energy policies, and carbon regulation legislation have been adopted across the West.  Washington state’s Clean Energy Transformation Act set a goal of ending coal generation in the state by 2025, and Oregon has set a similar goal for 2029. These policies establish a framework for existing resources and future resource development and will impact emissions in future years.

National emission rates follow a similar trend with a few key differences. Annual carbon emissions are trending down, while coal generation decreases and natural gas increases. However, the Pacific Northwest often has a lower greenhouse gas emission rate due to its abundant hydro resources. This is highly dependent on the water year. A lower water year means the region will have to rely on other generating resources, especially coal and natural gas, which would cause higher emissions.

2019 data is not yet available but, as it stands now, demand is down about 1.3 percent compared to 2018. The National Oceanic and Atmospheric Administration forecast a below average water year for the region, which means that regional emissions will likely increase. However, the recent shift away from coal and the increase of renewables in the region may soften the extent of the increase.

We’ve seen a sharp decline in emissions due to global shutdowns. However, there is currently no indication of a long-term change in overall trends. Lasting change would require societal and structural shifts that we’re not seeing at this time. It’s mostly likely that emissions will rebound to previous levels once shutdowns are eased.