In the 1990s, sockeye salmon in the Okanagan Basin were at a very low point. Today, thanks to a variety of restoration actions through multiple entities, sockeye returns hit record numbers at Bonneville and Wells dams in 2022. From an annual average of 310,000 during the mid-2000s -2020 to a high of 663,252 this year. 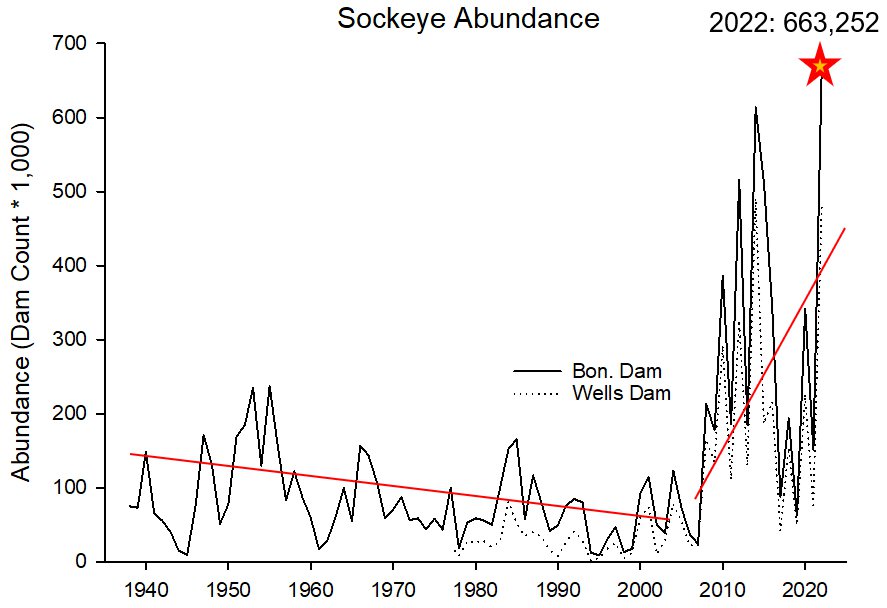 At the December Council meeting, representatives for the Colville Confederation Tribes and the Okanagan Nation Alliance gave an encouraging update on the 20-year effort to restore this integral fishery to its historical range.

Columbia River sockeye population may have numbered more than 4 million fish around the end of the 20th century. Today, only the Okanogan and Wenatchee stocks in Washington remain.

Casey Baldwin, senior research scientist with the Colville Confederated Tribes described the migration challenges for adult fish as they encounter a thermal barrier in the Okanagan. Along with dams blocking passage into the river system, “Seasonal high-water temperatures halts migration, and mortality can reach between 30 – 40 percent,” said Baldwin. “Stream temperature in the Okanogan often exceeds 72 degrees by early July.”

In 2000, the Colville Tribes and the Okanogan Nation Alliance began working together to bring sockeye salmon back in larger numbers, securing funding through the Council’s fish and wildlife program to evaluate the risks of putting sockeye into Skaha Lake.

After concluding that the risks were low and the benefits tangible, in the spring of 2004 fry were released into the lake, beginning the process of reintroducing sockeye into their historic range.

In 2006, the Council recommended funding a project to investigate several fish passage options, and in 2009, McIntyre Dam was fitted with gates, fishways, and spawning platforms enabling salmon and steelhead access into Skaha Lake in 2014. Rearing habitat for sockeye increased over two-fold.

Another important component of the project is a computer model that provides key data on snowpack, runoff, and temperature, for example, to help decision makers balance the water needs of competing interests. The model provides information on flow rates based on snowpack, water storage, and storms, which helps keep water flows stable so sockeye eggs don’t dry out or wash away.

Ryan Benson, fisheries biologist and Skaha Lake sockeye reintroduction program coordinator for the Okanagan Nation Alliance, noted the spiritual and cultural value of the fish and the importance of the kł cp̓əlk̓ stim̓ Hatchery in augmenting the sockeye population, along with the passage improvements.

“The resiliency of these fish in the face of numerous challenges–invasive species like mysis shrimp, habitat loss, and climate change is truly remarkable,” said Kirk Truscott, Colville Confederated Tribes.

These efforts will be even more crucial as the climate warms. “As long as the extreme temperatures and low-water conditions we saw in 2015 don’t become the norm, we hope we can keep fish numbers up," said Baldwin.

“An average 10-fold increase in returns over the last 18 years is an achievement worth celebrating” noted Council Chair Guy Norman.

The Phase 2 Plan shows the deep importance of reintroducing salmon to the UCUT members and the Upper Columbia River ecosystem, while addressing needs identified in the F&W Program to mitigate for the complete loss of anadromous fish in the blocked area.