Tree down at Lookingglass hatchery.png 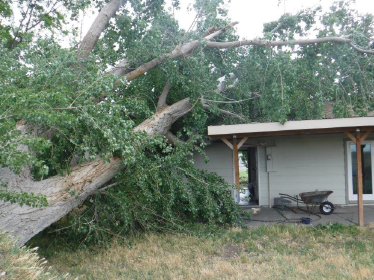 Here's one example of an unplanned maintenance need, the result of a sudden and violent windstorm at the Clearwater Hatchery in Idaho.

With many of its 26 facilities nearing 40 years old, and maintenance needs increasing as a result, managers of the Lower Snake River Compensation Plan (LSRCP) salmon and steelhead hatcheries have identified a total of $131 million in needed repairs and upgrades. Of these, projects totaling $27 million are ready to proceed. The managers, which include fish and wildlife agencies (state and federal) and tribes, are concerned the annual budget for maintaining the facilities, about $5 million, while sufficient in the past, won’t be in the future. In fact, at that rate it would take 26 years to do all the currently identified work.

This month in a report to the Council’s Fish and Wildlife Committee, LSRCP managers from the U.S. Fish and Wildlife Service, the Oregon and Washington departments of fish and wildlife, and the Nez Perce and Umatilla tribes discussed the maintenance needs, which include both planned and unplanned work, and asked for the Council’s support in their appeal to the Bonneville Power Administration and the Northwest congressional delegation for more money.

Among the problems identified with aging infrastructure, some anticipated and others not, the managers cited the failure of a water pumping station at the Lyons Ferry Fish Hatchery at the confluence of the Palouse and Snake Rivers, which cost $4.5 million to repair. Also, damage to a two-mile-long water pipeline that supplies the hatchery cost $800,000 to repair; replacing it will consume about half of the identified $130 million in needed repairs and replacements. The pipeline, now 40 years old, had an anticipated life of 25-30 years. The managers also cited the need to repair major weather damage to structures at the Lookingglass Hatchery on a tributary of the Grand Ronde River in Northeastern Oregon. The LSRCP has an annual budget of about $31 million. The Compensation Plan hatcheries and related facilities are responsible for 60 percent of all the hatchery-raised salmon and steelhead produced in the Snake River Basin, which is 20 percent of total hatchery production in the Columbia River Basin above Bonneville Dam, said Roy Elicker, assistant regional director of the U.S. Fish and Wildlife Service.

The plan was approved by Congress in 1976 and is intended to compensate for the salmon and steelhead lost to construction and operation of the four federal dams on the lower Snake River, a loss estimated at 48 percent of pre-dam production. In order moving up the river from its confluence with the Columbia, the four dams are Ice Harbor, Lower Monumental, Little Goose, and Lower Granite. Before the dams, the Snake River Basin was a major fish producer, home to 22 percent of all fall Chinook salmon produced in the Columbia River Basin, 55 percent of the spring/summer Chinook and more than 60 percent of all steelhead.

The LSRCP facilities produce a total of about 20 million salmon and steelhead smolts annually. There are annual numeric mitigation goals for adult fish that return from the ocean. For example, the goal for steelhead is 55,200 and for fall Chinook, 18,300. While these goals have been achieved consistently, except in recent years, the goal for spring Chinook, 58,700, has never been met. Increased production of juvenile fish could help, and there are unused raceways at the Clearwater Hatchery that could be utilized, but that would involve increasing the water supply – another “non-recurring” expense.

The Compensation Plan hatcheries are not considered part of the Council’s Columbia River Basin Fish and Wildlife Program. However the Bonneville Power Administration, which funds hatcheries in the Council’s program, funds operation and maintenance of the LSRCP facilities through a direct-funding agreement that accounts for the hydropower share of the fish impacts of the four dams. Bonneville’s preliminary 2022-2023 rate case identifies $31 million for the LSRCP, a slight increase over the current year. It has been higher in the past – $33.4 million in 2018, for example. In addition to proposing a flat budget for the next two fiscal years, Bonneville also moved the Fall Chinook acclimation project, $800,000, from the Council’s fish and wildlife program to the LSRCP to fund.

The managers are concerned not only that the flat budget does not account for inflation, but also that moving the fall Chinook program increases pressure on the budget. They would like Bonneville to increase its operation and maintenance funding to $35.7 million in 2022 and $36.4 million in 2023 to be able to allocate $5 million a year for non-recurring maintenance. The managers see this as necessary to keep the LSRCP facilities maintained adequately until there is a longer-term solution for funding of scheduled and unscheduled maintenance of the LSRCP facilities.

That’s the biggest problem. There is no plan for addressing longer-term capital infrastructure fixes or emergency failures.

“There’s a problem with who’s responsible; we need to tease that out,” said Dave Johnson, fisheries manager for the Nez Perce Tribe. He asked the Council to support the LSRCP managers’ effort to implement a long-term approach for maintenance of facilities like the LRSCP that mitigate for hydrosystem impacts.

In letters to the Northwest Congressional delegation in April of this year, the Nez Perce Tribe wrote that the LSRCP is essential to supporting federal legal responsibilities to Columbia River tribes regarding the harvest of Columbia River salmon, “… as well as contributing to treaty and non-treaty subsistence, ceremonial, recreational, and commercial ocean fisheries. Aging infrastructure coupled with insufficient funds, put the continued operation of these hatcheries at risk.”

Adjusting upriver dam operations has stabilized Columbia River flows and boosted wild fish production in the last free-flowing stretch of the river in the United States.

Washington Department of Fish and Wildlife Director: 'COVID Turned Our World Upside Down'

As if Kelly Susewind’s plate wasn't full enough already with fish, wildlife, and budget issues, the pandemic burst onto the scene like an overbearing, uninvited dinner guest.

The expenditure is for work outside routine maintenance needs and comes partly from savings in other projects in the Council's fish and wildlife program.

A plan by the U.S. Environmental Protection Agency identifies cold-water refuges in Columbia River tributaries where adult salmon and steelhead can rest as they migrate from the ocean.