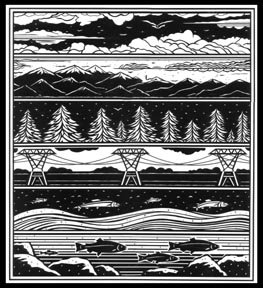 Sunshine in California may have a chilling effect on the budget for projects that benefit fish and wildlife in the Columbia River Basin.

That’s because the wholesale power market on the West Coast increasingly includes large amounts of inexpensive, surplus renewable power from California, particularly solar. At times, this has the effect of driving down prices and making surplus power marketed by the Bonneville Power Administration from its system of 31 federal dams and one non-federal nuclear plant uncompetitive. Bonneville is the primary financier of the Northwest Power and Conservation Council’s Columbia River Basin Fish and Wildlife Program, which has an annual budget of around $250 million. Revenue from surplus power sales is an important part of Bonneville’s budget, including the fish and wildlife program budget.

While Bonneville is committed to continuing funding the program at current or slightly higher levels next year and in 2019, that’s not a given at this time because of “significant uncertainty,” Bonneville’s executive manager of the Fish and Wildlife Division, Bryan Mercier, told the Council at a meeting this month. Sources of that uncertainty include the potential for reduced surplus power sales, possible increased fish and wildlife mitigation costs associated with Endangered Species Act litigation, development of a court-ordered environmental impact statement on Columbia and Snake river federal dam operations, and the potential costs associated with the soon-to-expire Columbia River Fish Accords if they are renegotiated.

“This is a concern,” he said. “We could lose customers. Tradeoffs and tough decisions may be necessary.”

2017 has been a challenging, if manageable, year for Bonneville, he said. The fish and wildlife budget “is tracking very closely to where we were last year through the end of July, and that’s a good thing from our perspective.” But he added, “our financial situation is not as solid as we had thought. Secondary [surplus power sales] revenues were not materializing as we expected, and so we looked for cost savings – actively balancing the budget. We will continue to actively manage the budget, but I suspect the [Fiscal Years] 2018 and 2019 budgets will be adjusted,” he said.

He said project-funding decisions will focus on existing priorities and commitments; on-the-ground work with direct fish and wildlife benefits before research and monitoring projects; contracting for essential Program work elements; limiting travel, training, and conference attendance; and on projects that demonstrate results and performance.

Bonneville also is focusing attention on project contracts, looking for savings that might help offset future budget cuts. “This year we are trying to capture as much as we can at the contract level,” Mercier said. “We’re asking our contracting officers to be more engaged, asking pointed questions about why a project is needed and what it will accomplish. We want to find those opportunities first.”

He said if the cost-savings effort continues to keep the budget in check, the agency should avoid having to initiate a cost-recovery adjustment clause.