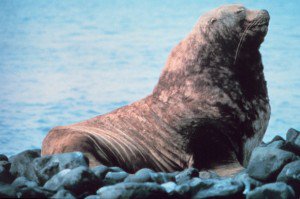 There's a common perception that the National Oceanic and Atmospheric Administration's decision to allow Oregon, Washington, and Idaho to kill California sea lions at Bonneville Dam addresses the fish predation problem there. But right now, most of the damage is being done by Steller sea lions, not California sea lions. And it's sturgeon they are mostly eating, not salmon.

According to the Army Corps of Engineers' latest status report on pinniped predation at the dam, "California sea lions have remained scarce so far this year...We have documented approximately 45 different Steller sea lions visiting the dam so far and seven California sea lions."

The Steller's impact on sturgeon is a concern for fish managers worried about their toll on the population in the lower river. The fish aren't listed, but Oregon and Washington have reduced the lower river harvest in recent years because of a decline in their numbers. While the sturgeon catch is less than last year's catch at this time, at 1,189 fish it's still high. It's a difficult issue because Steller's are listed as threatened under the Endangered Species Act, so they can't be harmed.

The total expanded salmonid catch, primarily by Stellers, through March 14 was 119 fish, much less than in the last six years. Last year at this time, the estimated salmon take was 185 and in 2010 it was 274. The Corps, which owns Bonneville, has been monitoring Steller and California sea lions since 2002 when they began arriving to feed on spawning salmon below the dam.  Sturgeon also mill around that area, making the estuary an easy feeding ground for the marine mammals. The Corps is only observing sea lion take in the immediate area of the tailrace below the project, not further downstream, so it's hard to know exactly how many sturgeon or salmon are falling prey to sea lions below the dam to the river's mouth. It would take many more boats and observers to try and do so.

For now, hazing is the method of deterrence for California sea lions. They're protected under the Marine Mammal Protection Act, which is why NOAA's authorization was required. As the season continues, their numbers and level of predation may increase, and if so, the states will be able to protect endangered salmon and steelhead by trapping and lethal means. It's a hard choice of last resort, but a necessary step to save a species that the region has made substantial investments to recover.
Topics:
Tags: