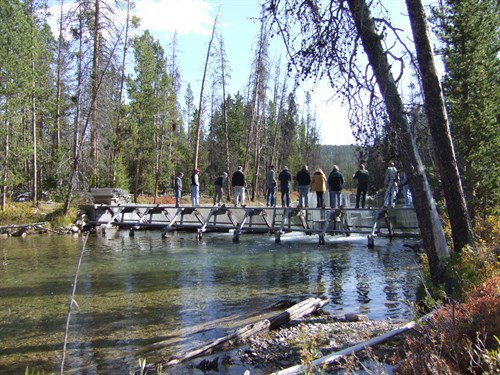 Wiers like this at the outlet of Redfish Lake in central Idaho help biologists sort wild and hatchery fish.

Like the proverbial elephant in the room, the future role of salmon and steelhead hatcheries “is one of the larger issues we will deal with,” Council staffer Peter Paquet told the Council’s Fish and Wildlife Committee Wednesday. Like an elephant in the room, the issue is impossible to ignore, but people are talking about it -- and they don’t agree.

Fish-management experts have polar-opposite opinions about whether hatchery-produced fish help or harm fish that spawn in the wild, and therefore how salmon and steelhead hatcheries should be operated in the future. They expressed those opinions in great detail to the Council in recommendations to amend the Columbia River Basin Fish and Wildlife Program. The program supports funding for artificial production programs, mostly at hatcheries run by Indian tribes, totaling tens of millions of dollars annually -- $83.4 million in 2012, for example.

By law, the Council amends the program every five years. The current program dates to 2009; a new program is expected by next summer, and this month and next the Council’s Fish and Wildlife Committee is digging into more than 480 amendment recommendations, guided by summaries prepared by the Council’s staff.

This week the committee will meet three times -- normally it’s once a month -- to review the recommendations, a major step toward writing a draft program for public comment early in 2014. Artificial production was on Wednesday’s agenda.