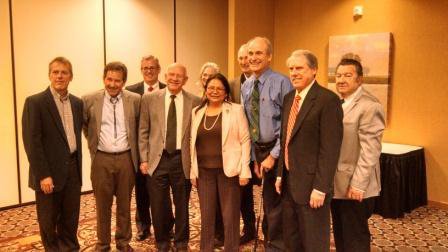 After approving the first step toward a new hatchery for Walla Walla River spring Chinook, Council members pose with N. Kathryn Brigham, a member of the Board of Trustees of the Confederated Tribes of the Umatilla Indian Reservation, and Brent Hall of the tribes' fish and wildlife staff at a meeting today in Helena.

It’s taken more than two decades, but today the Confederated Tribes of the Umatilla Indian Reservation are ready to move ahead with a new, $11.8 million salmon hatchery to provide spring Chinook for present and future generations. It took time to secure agreements to leave water in the river for fish while also ensuring that agricultural businesses that also rely on Walla Walla River water remain viable.

This week the Northwest Power and Conservation Council approved master-planning for the first stage of the hatchery. The Tribes are proposing to add incubation, early-rearing, and final-rearing facilities to an existing adult-fish holding and spawning facility that is a component of the tribes’ Umatilla Hatchery. The new facility would produce 500,000 yearling spring Chinook smolts annually for release into the Walla Walla River Basin -- 400,000 into the South Fork and 100,000 into the Touchet River. The Tribes’ long-term goal is to provide in‐basin harvest for treaty and non‐treaty fisheries, and restore natural spawning. Spring Chinook were extirpated in the Walla Walla Basin over many decades as the result of altered habitat and water depletions from agricultural practices.

Speaking on behalf of the Umatilla Tribes, N. Kathryn Brigham, a member of the Board of Trustees, said the new hatchery has cultural significance by providing access to salmon, one of the traditional foods. Brigham said she was pleased that the Walla Walla hatchery expansion was a collaborative effort of the tribes and basin stakeholders, including irrigators and ranchers.

The hatchery will be paid for by the Bonneville Power Administration through its responsibility to mitigate the impacts of hydropower dams on fish and wildlife. Lorri Bodi, Bonneville vice president of environment, fish, and wildlife, praised the new hatchery, calling it “a state of the art facility with a state-of-the-art approach.” The Council’s Independent Scientific Review Panel also approved the project.

Planning and design are scheduled for completion by August 2014. With subsequent approval by the Council, construction would take place in 2014 and 2015, the first fish would be released in 2017, and the first adult fish would return in the spring of 2019.