Eulachon — a species of smelt found within the Columbia River — are native fish that travel between fresh and salt waters and are, like salmon, a signature species in the Pacific Northwest. The small, silvery fish migrate in the winter and early spring from the ocean to rivers along the West Coast to spawn. Historically, their runs were a critical food source for native people at a time of year when other food sources were very limited. A fatty fish, the grease rendered from them is rich in vitamins E and K and is used medicinally by tribes. In the realm of fish and wildlife, they are an important source of food for other fish, mammals, and birds.

Meriwether Lewis first documented the enormous runs in 1806, when eulachon returned to rivers from northern California all the way up the coast to southern Alaska. As noted by J.B. MacKinnon for National Geographic:

“The lower Columbia, which marks the border between Washington and Oregon, was one of the greatest eulachon rivers of all. Some scholars argue that the word ‘Oregon’ is derived from a pronunciation of the word ‘eulachon’ used by aboriginal traders as they told European explorers of the riches to be found in the West.”

In 2010, NOAA Fisheries listed the southern Pacific eulachon as threatened under the Endangered Species Act. The Council’s fish and wildlife program includes a strategy to better understand and protect eulachon in the basin and worked with the Bonneville Power Administration, the Army Corps of Engineers, and the National Oceanic and Atmospheric Administration to conduct a science forum in 2015 to help formulate a federal recovery plan.

In an update on the status of the fish presented at the Council’s April meeting, the early data is encouraging. According to Laura Heironimus, Washington Department of Fish and Wildlife, the 2021 sampling, while still in progress, indicates a run size of over 4 million pounds, and larval counts are still increasing.

The 2021 harvest totals reflect a strong sport fishing showing, a one-day opportunity during the pandemic. On March 2, the WDFW, working with county health officials and the governor’s office, set safe fishing guidelines and opened recreational fishing on the Cowlitz River resulting in an estimated catch of 91,000 lbs. of fish. Other preliminary 2021 catch estimates include approximately 11,000 lbs. brought to market by commercial fisheries and an estimated 20,000 lbs. harvested for tribal subsistence. 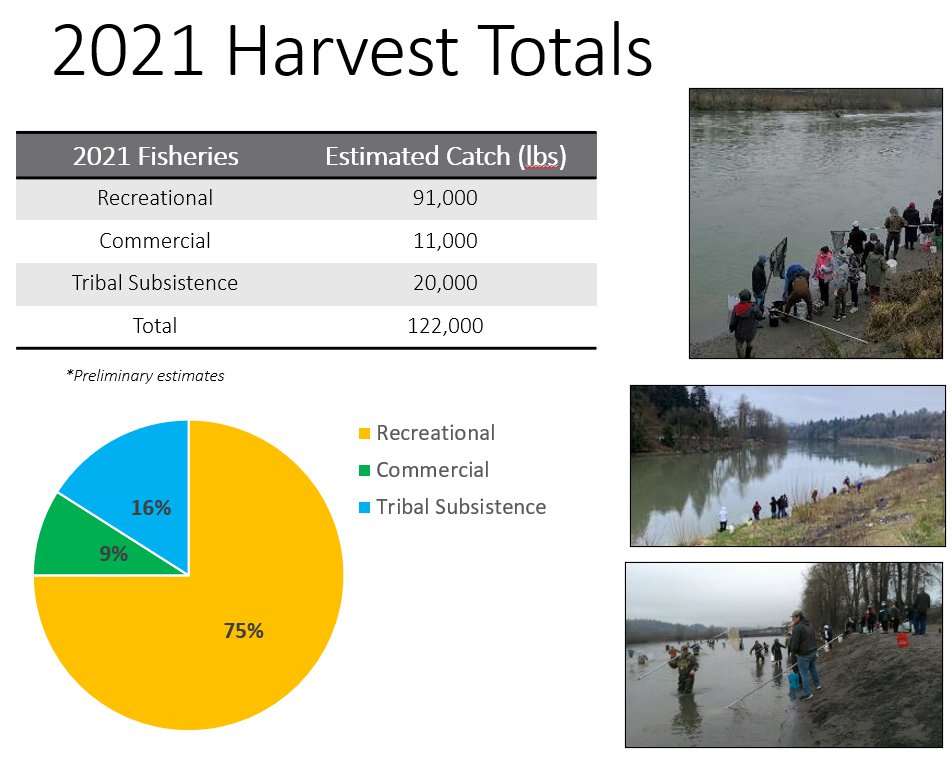 Like salmonids, the quality of the freshwater and marine environment are major factors that contribute to eulachon abundance and survival. The recovery plan identified climate change impacts on ocean conditions as the highest threat to persistence for the species. Some ways climate shifts may impact their survival include: 1) a low river flow decreases the Columbia River plume volume, poorly distributing larvae into the marine environment; 2) shifts to a warm-water regime in the ocean decreases prey quality and availability; and 3) shifts to a warm-water regime in the ocean create areas of depleted oxygen levels in the nearshore environment.

In recent years, many of these variables have been improved, leading to the growing run sizes in 2019-2021. When several years of these improved conditions overlap, multiple age-classes returning to the river (eulachon generally spawn between 2-5 years old) increase. However, those improved conditions may not last and a shift back to poor conditions would probably put the run into another decline.

Eulachon bycatch, specifically in the pink shrimp trawls, was also identified as a high threat to the species. Regulations passed in 2018 required LED lights on shrimp trawls to reduce their bycatch, and it appears to be having a big effect. Research into the LED lights showed a 90 percent reduction in Eulachon bycatch and a 56-82 percent reduction in certain rockfish and flatfish species. The recent implementation of LED lights may be having a positive effect on survival of those fish out at sea, leading to larger runs in river.

WDFW’s goals for 2021 include continuing to monitor the spawning run; provide sustainable fisheries; and seek partnerships and funding to improve recovery efforts. Plans to revise the 2001 Washington and Oregon Eulachon Management Plan are also underway in 2021.