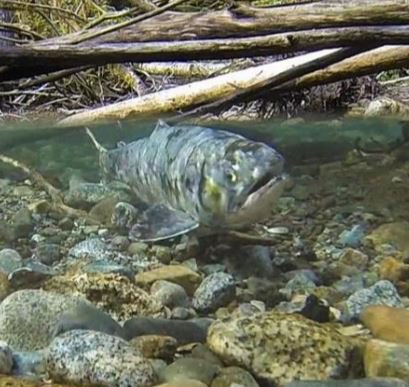 Of the 13 salmon and steelhead species in the Columbia River Basin that are listed as threatened or endangered, only one, upper Columbia spring Chinook, is not showing even modest progress toward recovery.

Of the three distinct populations that comprise the species – those in the Entiat, Wenatchee, and Methow rivers of north central Washington – researchers have detected a slight rise only in the Entiat population, but it is not considered significant. The average number of adult spawners for all three populations over the last 12 years is 1,214 fish, and the number considered necessary to keep the species viable and avoid extinction is 4,500.

The recovery effort for the fish and other salmon and steelhead in the upper Columbia region is a joint undertaking of many agencies, including the Upper Columbia Salmon Recovery Board, state and federal fish and wildlife agencies, two Indian tribes, and three public utility districts that own and operate five dams on the mainstem Columbia River. It’s a big effort that has directed around $100 million toward projects to improve habitat where upper Columbia spring Chinook spawn and rear, improve dam-passage survival, and monitor population trends. Potential remaining issues that limit the populations include lake survival, overwinter and pre-spawn survival, and high numbers of hatchery fish on the spawning grounds.

“We were finding that fixing habitat is not exactly the right question when you are prioritizing funding,” said Greer Maier, Upper Columbia Salmon Recovery Board science program manager. “It really gets down to how fish are using the habitat, and then deciding how to address the problem; we have a lot of habitat information but we just don’t know how to use it.”

To use the data repository more effectively, the recovery partners are developing a sophisticated computer model that will allow them to plug in the available data and then simulate the life cycle of an upper Columbia spring Chinook from spawning to migration to the ocean and back to spawn.

“The model will target movement toward recovery and allow us to play with scenarios to get to recovery targets, and then more fully understand the effects of our projects on recovery,” Maier said.

The life-cycle model is just one in a “long list of projects for spring Chinook that will help identify survival bottlenecks and address fish habitat limiting factors,” Andrew Murdoch, eastern Washington science manager for the Department of Fish and Wildlife, told the Council.

Meanwhile, Grant, Douglas and Chelan public utility districts have been achieving their survival targets for spring Chinook at the dams they operate. Compensation for unavoidable mortality at the dams occurs through hatchery and habitat actions, as well as removal of predators from the Columbia, notably northern pikeminnow. The PUDs have also been involved in restoration actions to improve production of spring Chinook in the Okanagan Basin in Canada, complementing efforts by the Colville Confederated Tribes to reintroduce spring Chinook into the Okanogan/Okanagan Basin.