Based on the results of a new regional survey, the Council reported this month that the Pacific Northwest has reduced demand for electricity by 1,739 average megawatts over the last six years — enough saved electricity to meet the annual power demand of 1.25 million homes and avoid the need to build four new average-size natural gas-fired power plants. The annual Regional Conservation Progress survey found that in 2015 alone, 284 average megawatts were saved. The six-year savings were achieved through a variety of sources, including utility-funded programs, the proliferation of energy-efficient consumer products, and building codes that improve energy efficiency. This adds to a strong, four-decade history of energy efficiency in the Northwest that has saved enough electricity to light five cities the size of Seattle. It also saved Northwest electricity consumers about $4.06 billion in 2015, which is the estimated additional cost consumers would have paid, based on average electricity rates, if the region had not achieved that level of efficiency and had an additional 6,000 average megawatts of load. The efficiency also lowers carbon emissions by an estimated 23.5 million metric tons a year, the carbon output of 5 million passenger vehicles. And, these savings and carbon reductions will keep growing. The Council has recommended that an additional 1,400 average megawatts of efficiency investments can be made between now and 2021. This will ensure that the Northwest continues to be the leader in maximizing energy savings and reducing carbon emissions.

The Council was authorized by Congress in the Northwest Power Act of 1980. Its members are appointed by the Governors of the four Northwest states. The Council is required by law to develop and regularly update a 20-year, least-cost power plan for the region that emphasizes energy efficiency as the region’s priority new energy resource.

A significant part of the plan is identifying the amount of cost-effective energy efficiency that the region’s electric utilities and their consumers can acquire over the duration of the plan. For the 2010-2015 plan period, the Council recommended the acquisition of 1,490 average megawatts of efficiency. The release of the 2015 survey results shows that the six-year target was actually exceeded by 249 average megawatts.

Most of the savings in 2015 occurred in residential equipment, such as improved lighting, heating, air conditioning, appliances, and the proliferation of smarter technologies and devices such as connected thermostats. Residential improvements accounted for 47 percent of the total savings in 2015; commercial building improvements accounted for 33 percent; improvements in industrial buildings 16 percent; and the remaining 4 percent was in agricultural, irrigation, and other sectors of the economy.

The Council is unique in the nation by placing the cost of reducing energy usage (energy efficiency) on an equal footing with the cost of energy production so that saving energy is as much a measurable resource as energy generation. By this standard, energy efficiency is by far the lowest-cost energy resource, with the added benefit of being carbon-free. In addition, energy efficiency reduces the amount of expensive power generation, transmission, and distribution facilities needed to meet peak demands on cold winter days and warm summer afternoons. This lowers electricity bills for consumers.

“These results are more good news for the Northwest, continuing a nearly 40-year trend toward an ever cleaner and more efficient electricity supply,” Council Chair Henry Lorenzen said. “With hydropower as the region’s largest source of electricity, followed by energy efficiency, more than 70 percent of our electricity supply is carbon-free, ensuring that we in the Northwest enjoy the cleanest and lowest-cost electricity system in the nation.”

The region’s utilities spent $440 million on energy efficiency improvements in 2015 at an average cost of $16.50 per megawatt hour, a bargain compared to the cost of a new power plant fueled by natural gas ($71 per megawatt-hour) or a solar power plant ($61-$91) or wind ($102), according to the survey.

Each year the Council’s staff gathers energy efficiency data from more than 140 utilities, the Energy Trust of Oregon, and the Northwest Energy Efficiency Alliance, a Portland based non-profit that works to drive market adoption of energy-efficient products, services, and practices for the benefit of utilities, consumers, and the region. The 284 average-megawatt total, along with savings from consumers purchasing energy-efficient products, surpassed the 290 target for 2015.

Total regional savings since 1980, when the Northwest Power Act made energy efficiency the primary resource to meet new demand for power in the region, is now nearly 5,962 average megawatts, more than the power demand of five cities the size of Seattle. 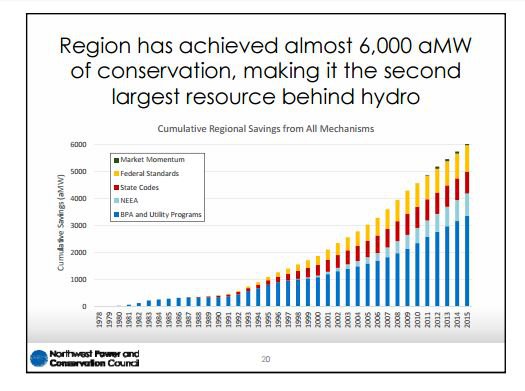