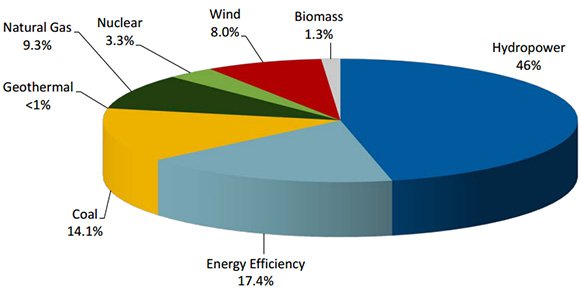 In 2014, Pacific Northwest utilities developed 262 average megawatts of new energy savings, enough to power 180,000 homes each year, adding to the region’s impressive track record in achieving energy efficiency. Between 2010 through 2014, the cumulative savings of 1,500 average megawatts exceeded the target of 1,200 average megawatts set in the Council’s Sixth Power Plan.

Since 1978, when regional investments in energy efficiency began, utility-funded programs, combined with improved building codes and federal efficiency standards, have saved almost 5,800 average megawatts, enough power for five cities the size of Seattle. It has met 57 percent of our load growth, and today, it’s the second largest resource in the Northwest after hydropower.

The Council estimates that these accumulated savings have saved consumers nearly $3.73 billion and lowered carbon emissions by 22.2 million metric tons.

By building energy efficiency, we avoid the need to build new power plants and the carbon emissions they produce. Electricity bills are lower because developing efficiency is four to five times less expensive than the cost of new power plants. Unlike power plants, which have ongoing costs for fuel and operation, once the efficiency improvements are installed they deliver benefits year after year with no ongoing costs.

“We all benefit from these savings in the form of lower energy bills and lower carbon emissions,” Council Chair Phil Rockefeller said. “It’s been a critical strategy in preserving our quality of life in the Northwest.”

The energy savings information was compiled by the Regional Technical Forum, an advisory committee to the Council that develops standards to verify and evaluate energy efficiency savings. The RTF conducts an annual survey of utilities, system benefits administrators, the Northwest Energy Efficiency Alliance, and the Bonneville Power Administration on their efficiency expenditures and savings.

According to the survey, most of the savings came from homes through such things as replacing incandescent light bulbs with more efficient LED or compact fluorescent bulbs, improving home insulation, and purchasing new energy efficient appliances. Energy savings also occur in businesses and industries through installing more efficient lights, motors, pumps, furnaces, and other equipment, and also through improving HVAC systems in buildings.

The report on efficiency achievements comes as the Council is hearing from the region on its draft Seventh Power Plan. The draft plan finds that cost-effective energy efficiency could meet all load growth through 2035.