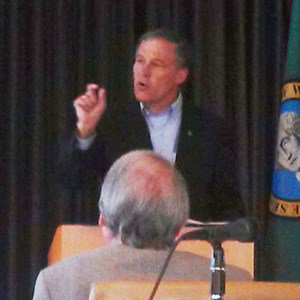 Washington Governor Jay Inslee today challenged the Council to continue leading the region toward a cleaner, more efficient, and lower-carbon-emitting power system as it develops its next regional power plan. The Governor addressed the Council this afternoon at its meeting in Seattle.

Inslee congratulated the Council for improving energy efficiency in the Northwest by more than 500 average megawatts over the 2010-2011 period.

“You ought to be proud of this,” he said. “But this is not a time to rest on our laurels.”

“Climate change is a proven fact,” he said. “Industries are threatening to leave my state because of climate issues like ocean acidification. The worst thing to do about climate change is to ignore it and let it swallow your industries. It has been estimated that climate change will cost Washington state $10 billion by 2020.”

“I believe we can and will step up to this challenge, and no small part of this is in your hands,” he said.

Washington benefits from the increasingly low-carbon power supply and the jobs that are created as a result, he said.

“Shrinking our dependence on imported energy will strengthen and expand our economy,” he said. “We have 120,000 green jobs in Washington — one-third in energy efficiency and about 14 percent in renewable energy. Those jobs were created in part because of your vision and, and I want to thank you for that.”

But there is more to do, he said, moving toward an electricity system that ultimately is carbon-free.

“Now I look to you to provide a vision statement to make that happen,” the Governor said. “You have the mandate and the resources to carry this out. Your Seventh Power Plan needs to go even further than the Sixth Plan and fully address how the Northwest will reduce carbon emissions from electricity generation in the fastest and most efficient way possible.”

Inslee said the Northwest must face the true costs of carbon and work to reduce emissions across all sectors of the economy, including the energy sector. Inslee said he envisions a regional partnership to make this happen, including the Council as a partner.

“We need to lead in our region first, and then the nation,” the Governor said. “You have been great leaders in the Northwest, and I want you to know you have a partner in Washington who will support your bold action. We will be there as a team, and that’s how we’re going to tackle this — as a team.”