A major project to restore habitat, reconnect floodplain, and restore ecosystem functions for the benefit of fish and wildlife, particularly salmon and steelhead, is in the final stages of planning along the Washington shore of the Columbia River about 15 miles east of Vancouver.

The Steigerwald Habitat Restoration and Flood Control Project involves a collaboration of numerous entities including the Bonneville Power Administration, Lower Columbia Estuary Partnership, Friends of the Columbia Gorge, the U.S. Fish and Wildlife Service, and others. The project would remove 2.2 miles of the existing levee along the river and build two new levees to protect adjacent properties from flooding. As a result, 912 acres of historic Columbia River floodplain would be reconnected to the river. The project also would expand the size of the existing Steigerwald Lake National Wildlife Refuge, which is managed by the U.S. Fish and Wildlife Service, and increase recreation opportunities by expanding the trail system.

A significant portion of the expanded refuge, some 160 acres, has been purchased by the Friends of the Columbia Gorge, a Portland-based conservation group, and will be turned over to the Fish and Wildlife Service. The Bonneville Power Administration will provide approximately $17 million for the project. An additional $4.6 million will come from the Washington Department of Ecology through its Floodplains by Design grant program.

Currently, the levee system, constructed in the mid-1960s, partially blocks Gibbons Creek from flowing into the Columbia, causing occasional flooding. The levee also blocks access to important potential resting and rearing habitat for migrating salmon and steelhead. In addition to removing a portion of the levee, the project would remove a water-diversion structure, enhance approximately two miles of wetland channels, and add to the restoration of a forest along the shoreline. The project also will reduce Gibbons Creek flooding and associated pumping costs at a wastewater treatment facility adjacent to the refuge.

The Steigerwald refuge was created as partial mitigation for the fish and wildlife impacts of the construction of the second powerhouse at Bonneville Dam about 20 miles upriver in the early 1980s. Expanding the refuge will increase habitat and restore natural ecosystem processes for the benefit of Winter Steelhead, Cutthroat Trout, Chinook, Coho, and Chum salmon, and Pacific and Western Brook Lamprey. 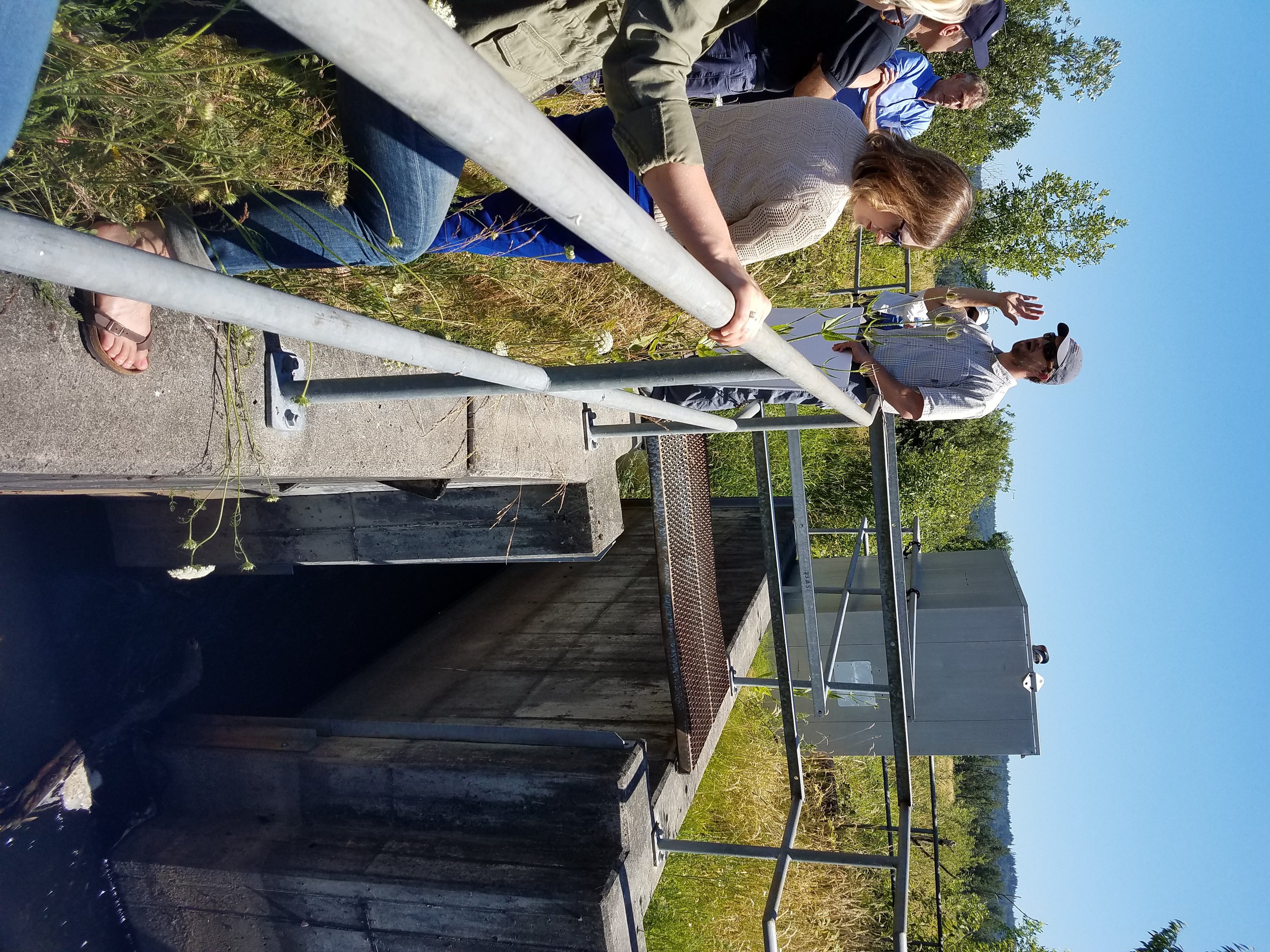 Chris Collins discusses the project at the water diversion that will be removed.

“We have pretty high confidence that the target species will utilize this habitat,” Chris Collins of the Lower Columbia Estuary Partnership said during a recent tour of the project site for Power Council members and staff. “When completed, this project will boost habitat between Bonneville Dam and the mouth of the Willamette River by 17 percent.”

Construction is expected to begin in 2019.