A unique approach that takes advantage of a unique characteristic of steelhead – unlike salmon, steelhead can spawn more than once – may be the thing that saves some threatened and endangered steelhead populations in the Columbia River Basin from extinction.

A steelhead that has returned from the ocean and spawned is called a kelt. For 16 years, the Columbia River Inter-Tribal Fish Commission and its member tribes have been experimenting with kelts, honing the practice of “reconditioning” the fish to get them to spawn again. The tribes have been conducting long-term kelt reconditioning experiments in the Yakima River and then in other locations for less time, including the Snake, Okanogan, Deschutes, and Hood rivers. 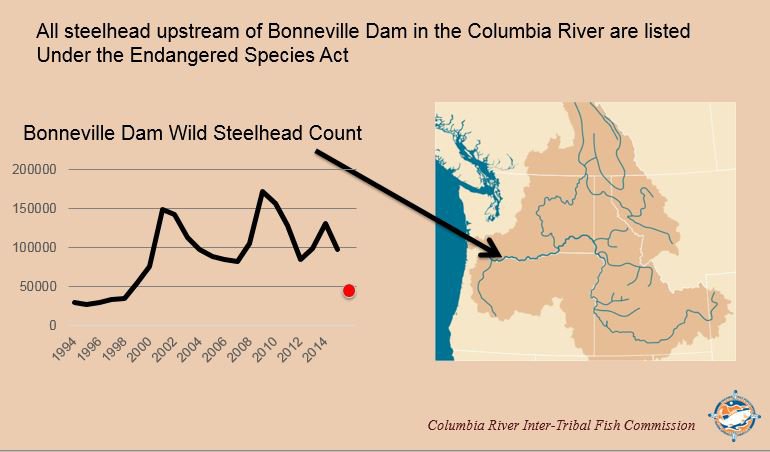 In December, the Council approved the next step in the master plan for kelt reconditioning, construction of a $2 million production facility at the Nez Perce Tribal Hatchery in Lapwai, Idaho. The money will be provided by the Bonneville Power Administration, which supports reconditioning Snake River B-run steelhead, a threatened species.

NOAA Fisheries, the federal agency that implements the ESA for salmon and steelhead in the Northwest, calls for a 6-percent improvement in the productivity of B-run steelhead in the Snake River, one of two runs in the Snake Basin, by reconditioning kelts and/or improving in-stream passage through the hydropower system. NOAA’s biological opinion on federal dam operations to protect listed fish species concludes that reconditioning is likely to yield enough additional spawning steelhead to exceed the threshold level for recovery of the B-run species. In fact, research to date indicates that long-term reconditioning of kelt steelhead can greatly increase the number of repeat spawners compared to leaving the fish in the river to spawn again on their own.

Reconditioning involves capturing downstream-migrating fish, screening them into a bypass system, holding them in a large tank, feeding them, keeping them until they are considered “rematured,” and then releasing them from late March through October into their natal waters. The project aims to increase the lifetime reproductive success of wild steelhead and assist with their recovery. While kelts are abundant in the Columbia, repeat spawners are rare, according to the tribal researchers. Kelts are almost always females, and artificially reconditioned kelts appear to find their way home with what the researchers call “high fidelity.”