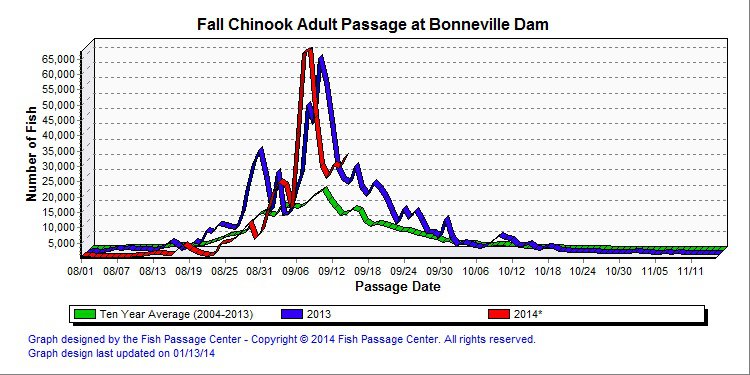 Coho, fall Chinook, and sockeye salmon returned from the Pacific Ocean to the Columbia River in record or near-record numbers this year.

The daily count of fall Chinook on September 8 at Bonneville Dam, 67,521 fish, set a single-day counting record at the dam, where counting began in 1938.

The fall Chinook run is not as big as predicted by Oregon and Washington fish and wildlife agencies earlier this year, but it still is a strong run. The agencies predicted the run would be around 1.2 million fish, but revised the prediction downward to 880,000 in mid-September. By then, September 15, the total was 585,331. In 2013, the run totaled 953,222.

The fall Chinook counted at Bonneville primarily are wild fish headed to spawn in the Hanford Reach of the Columbia, which is upstream from Richland, Washington. Another large component spawns in the Snake River.

Meanwhile, the 2014 sockeye run in the Columbia River was the largest ever counted at the dam. The run, which returns from the ocean mostly in July and August, totaled 614,180 fish by mid-September. The previous record return was 516,000 in 2012.

Next year’s run could be even bigger, based on the number of jacks in this year’s return. Jacks are immature fish that are considered a predictor of the next season’s run size.

By far, the largest share of the Columbia sockeye run originates in Lake Osoyoos on the Okanagan River in British Columbia. The second-largest component, which returns to Lake Wenatchee, exceeded 80,000 fish this, year, a modern-era record. The smallest component, which returns to Idaho’s Redfish Lake, totaled 2,769 counted at Lower Granite Dam, a modern-era record and a phenomenal recovery for a species whose counts dwindled to single digits at that dam in the 1990s.