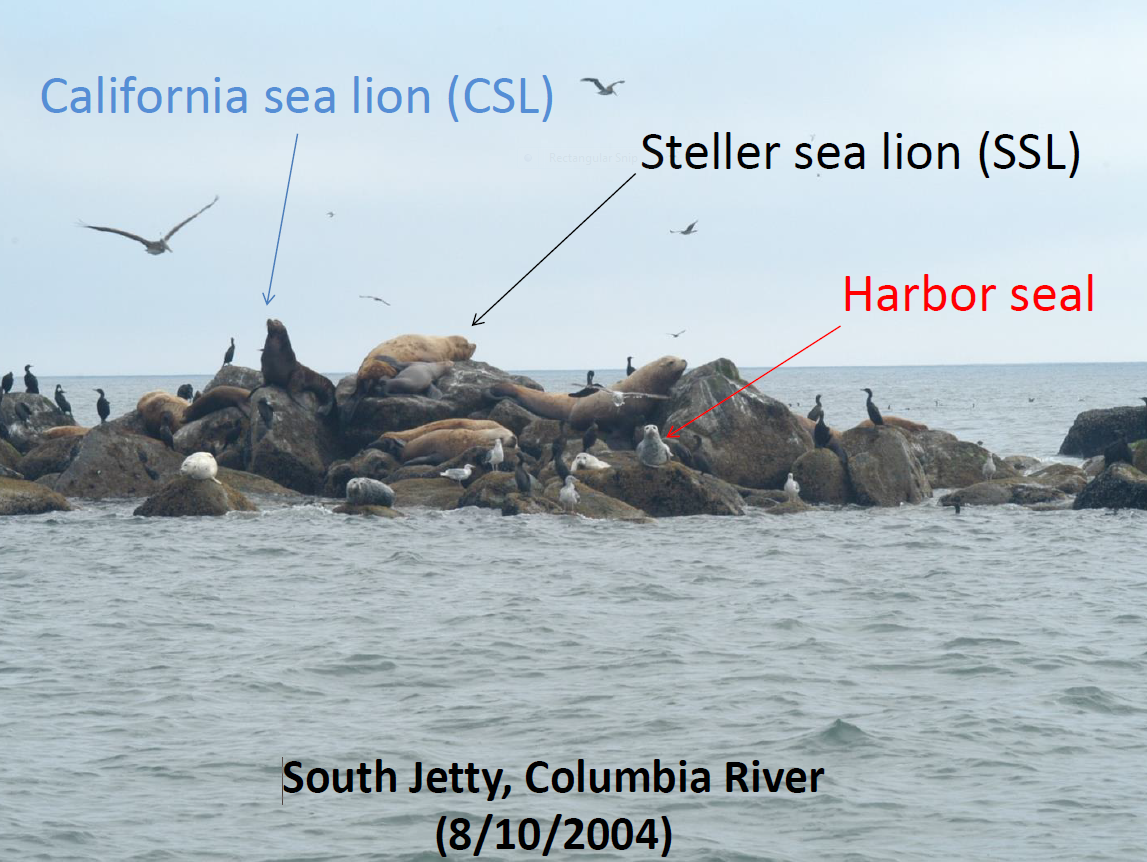 The number of sea lions in the lower Columbia River is increasing every year, and so is predation by sea lions on salmon and steelhead. Information presented to the Council this month suggests that consumption of salmon and steelhead by marine mammals at Bonneville Dam in 2014, an estimated 4,746 fish, is higher than in any of the past three years, but lower than it was annually between 2008 and 2010. Meanwhile, predation on salmonids by marine mammals at the base of Willamette Falls on the Willamette River appears to be increasing.

State and tribal biologists presented research data at the Council’s January meeting in Portland. Inriver surveys by the Columbia River Inter-tribal Fish Commission show two types of sea lions, California and Stellar, and harbor seals are in the river downstream of Bonneville Dam. Harbor seals are year-round residents in the river, and they eat fewer salmon and steelhead than sea lions.

Sea lions migrate along the West Coast from California to Alaska. Annually, those entering the Columbia in the spring, which represent only a fraction of the total West Coast population, are following smelt runs upstream. When the smelt are gone, the sea lions focus on salmon, sturgeon, and lamprey in the river before leaving in late May or early June for breeding grounds off the coast of southern California. Sea lions have been monitored at Bonneville for more than a decade, and more recently at Willamette Falls.

Robin Brown of the Oregon Department of Fish and Wildlife said it is estimated that through 2014, California sea lions killed more than 40,000 salmon, and Stellar sea lions killed more than 8,000, all near Bonneville Dam. Marine mammals are believed to have killed between 3,300 and 4,100 salmon near Willamette Falls in 2014 alone, numbers that would represent about 3 percent of the ESA-listed winter steelhead in the river and about 2 percent of the ESA-listed Chinook salmon.

Biologists noted an increase in the number of sea lions in the Columbia in the spring of 2013, and again in 2014. Brown speculated this is because of the increase in smelt.

Preliminary Research by NOAA Fisheries, which involves installing tracking devices on spring Chinook salmon in the estuary and then detecting their presence  at Bonneville Dam, suggests that as much as 45 percent of the spring Chinook run is disappearing between the estuary and the dam. Accounting for other sources of mortality, Brown said the lead NOAA researcher “was very clear about saying there is a probable link to seals and sea lions.” But, Brown added, “we could not take that to court. We don’t have the hard and fast data” to prove the assertion. “We all know they take fish, but we really don’t know how many.”

While the states have legal authority under Section 120 of the Marine Mammal Protection Act to remove the most problematic marine mammals, the process is complex and requires precise identification of animals that are repeatedly observed killing ESA-listed fish. Nonetheless, 73 California sea lions have been removed from near Bonneville Dam through 2014. The state does not have authority to remove Stellars, yet.